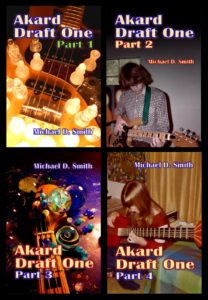 It must be highly unusual for an author to post a blurb for a book he emphatically does not want to sell. But I’ve been so pleased with how this four-part paperback version of Akard Draft One turned out that I just had to show off these pretty art objects. Somehow they turned out exactly as I’d imagined they would. I’m surprised how involved I got with this printing project, which also honed my publication technologies.

Why Did I Do This?

The rough draft of Akard Drearstone was my first breakthrough effort after two practice novels. I threw everything into this book, and its writing led me in undreamed-of directions. It’s odd to wonder what I would’ve been like, how many unanswered pressures I might still carry around, if I hadn’t spewed out 1,587 rough draft pages of Akard Drearstone from February 1976 to March 1978.

I had no backup copy of the rough draft. In the era of typed manuscripts I balked at photocopying 1,587 pages of something that over the years I rewrote over and over. But the typescript was psychically important and so, mainly to make a copy, in 2011-2012 I finally scanned and proofed a digital Akard Draft One, understanding I had to be leaving plentiful errors. 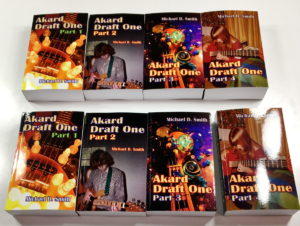 Then last month came the idea to use lulu.com to print Akard Draft One with all its flaws. Not for sale, just to print a couple copies and know it’s stored out there. I envisioned a single thick mass market volume with tiny type, but that proved impractical and, keeping a readable Times New Roman 10 font and having much fun making four separate covers, I made a four-part version.

I ran my current manuscript checklist on the 2012 scan, fixing hundreds of minor formatting errors, but soon realized there was no way I could readily make this thing perfect. The rough draft wasn’t faultless, and this digital/print copy isn’t either. Oddly, though, the text seems in basically good shape. I had to check the original typescript a few times, but mostly avoided that.

The Draft One Plot

A sudden rising star in 1977, Akard Drearstone wrecks his fifteen minutes of fame on the Johnny Carson show, then languishes as a bank clerk in Houston until the spring of 1979, when he meets sociopathic bass guitarist Jim Piston. Their collaboration rekindles his old fame and they set up an art commune north of Austin with two new band members. The novel meanders for fifteen hundred pages as the four rockers battle corrupt businessmen, freak out on psychedelics, get busted by mysterious narc agencies, stage demented concerts on the beach or at the scene of car accidents in Houston, debate the merits of the new philosophy of Exponentialism with a sexy writer for a Sunday rotogravure magazine, postpone working on their album in favor of a three-month-long videotape, write backbiting novels which get inserted into the narrative, and finally break apart in personality conflicts, psychotic violence, confusion and revenge trips. 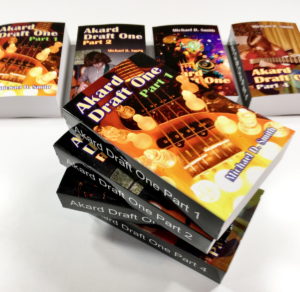 The idea of a hippie art commune was a vague life plan as I approached graduation from Rice University in 1974. But in getting married, moving to Dallas, and taking a dull, stressful insurance accounting job as I sought to start a writing career, I soon realized the cosmic impracticality of that idea. But I could write about the commune and create a universe of plot and characters around it. I could split my personality into four musicians and examine each part in depth.

Draft Two, May 1978 to December 1979, saw a much improved if still sprawling novel. Though I declared Akard Drearstone done and began typing a manuscript for submission to publishers, I aborted the effort in 1981, finally acknowledging I’d outgrown it. I had new writing to explore.

In 1985, after two more novels, I wrote the story “Chapter 32” to psychically end Akard’s thirty-one insanely long chapters. “Chapter 32” later served as the conclusion of a vastly altered 1994 Akard Drearstone. 2005, 2010, 2011, and 2012 revisions brought more perspective until 2017 pushed out the final published Akard.

I definitely don’t think of Draft One as the real writing. The final 2017 Akard is far superior, the karmically done expression. Consider that I would’ve had no motive in March 1978 to type up an exact copy of the rough draft. No, my desire was always to revise it into a workable novel. But this first foundation was an amazing experience to have lived through, and I find myself proud of the young man who dared compose it. 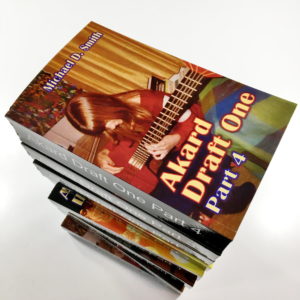 I took a lot of chances with the rough draft. I committed all the major literary crimes throughout, but the text does hold my interest despite the fact that I think of Akard Draft One as one good novel, one bad novel, and three mediocre novels maddeningly swirled together.

The 2017 published Akard Drearstone finally pulled out that one good novel.