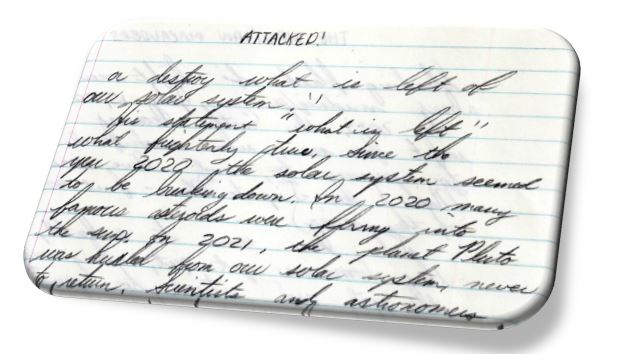 Celestial disasters of the 2020’s set the background for my Jack Commer science fiction series. While I’m not offering direct comments about the COVID-19 crisis, I’ve been struck by the odd timing of my childhood predictions about 2020.

When my eighth-grader self wrote the unfinished rough draft of The Martian Marauders, Fall 1965 to Spring 1966, he unconsciously followed a useful dictum of setting the story so far in the future that he wouldn’t have to worry–so he thought–about discovering whether his predictions would ever come true. So he could offhandedly note: “In 2020 many famous asteroids were flung into the sun,” as the characters in the book face an incomprehensible breakdown of the solar system across a fear-ridden decade, ending with the improbable collision of Jupiter and Saturn and a war destroying the Earth itself in 2033.

When I decided to complete the unfinished childhood novel decades later, and in the early 2000’s extended the story through a Jack Commer series, I stuck with 2020 as the start of the breakdown, violating my own maxim of pushing the story far into the future. I guess I thought 2020 was the far future. I even toyed with the idea of writing an unrelated novel about what might happen if my science fiction predictions were in fact to come true–if I’d inexplicably channeled knowledge of future calamity through the Jack Commer series.

As 2020 crept closer, I began to realize that my SF series would soon become dated, but I really don’t have any interest in revising the books. The chronology is just too complicated and the first six books are published anyway, though I have to admit I’d like to get my hands on the first three for some editing and polishing. Last year I figured that some light finagling might let me start the disasters in 2024 instead of 2020, but I quickly saw that would just buy four more years and soon the books would be out of date again. My one concession to the approach of 2020 was to jump the chronology ahead in Book Four, Collapse and Delusion. By 2075 rejuvenation technology has enabled all the characters to age into their seventies, yet still look and feel as if they’re thirty-five.

The bright side is that my series can now be considered like the classic science fiction of the ’40’s and ’50’s, where brave space entrepreneurs have colonized Mars by 1970. Those are still enjoyable reads and I hope Jack Commer holds up as well.

In any case placing world-shattering crises in the far future may be too comfortable an exercise for the science fiction writer. How can we postulate how those hapless victims of future dystopias will really act and feel? Our books, films and TV series show impossibly gifted heroes tackling one civilization-annihilating catastrophe after another and coming back next installment for more. Wouldn’t they all be sedated in psychiatric wards by now?

I didn’t really think the whole world would face a shock similar to my Jack Commer 2020. As time-traveling 2036 Joe from Nonprofit Chronowar (first draft 2000, published 2013) tells the May 2020 Committee to End Suffering on Planet Earth:

Joe cleared his throat. “So … February 9, 2020. Just three months ago for you all. Minor planet Ceres suddenly drops out of orbit–and accelerates directly into the sun! All within a few hours! Nobody can believe it. The astronomers and physicists are baffled, to say the least. How can Ceres, the largest asteroid in the solar system, come a complete halt in its orbit and start accelerating into the sun? A lot more than just simple gravity’s involved. There’s no way Ceres would’ve fallen in on its own in just nine hours. There was deliberate acceleration …”

“Okay, what’s the point?” Ranna snapped. “They haven’t figured out about the asteroids yet, but I’m sure they will.”

“Do you have the slightest idea how much energy it takes to bring a 630 mile-wide planetoid to a dead stop in its orbit? Or to accelerate it down? The Reamers quoted one astronomer explaining this as a quantum possibility or some such crap, a one-in-a-googol event. Did he shut up on March 9, 2020, when Pallas, the second largest asteroid in the solar system, stopped dead–and shot down into the sun as well.”

The faces were gray with shock. Joe did recall feeling sick and scared when he heard about the second asteroid. Jack’s advice had been to treat the whole thing logically, to study his physics and prepare to move out into the solar system and study the phenomenon up close. Somehow Joe succeeded in following Jack’s example. He spent weeks grimly keeping a mounting panic at bay about what would happen when the Earth itself came to a dead stop in its orbit …

“Then April 9, 2020. Vesta, the third largest asteroid in the solar system, shoots straight into the sun!”

The audience was doubled up in mourning for those big balls of rock they’d never given a thought to but which, once lost, represented something like the loss of an arm, or a leg–or a cousin–or a child–

“That your precious CTESOPE can do something?” Joe mocked the nonprofit lady, ashamed of his cruelty, unable to resist it.

“Dammit, I didn’t know about any asteroids, none of us did, I just wanted a Committee to End Suffering, was that so bad? Who the hell are you anyway, to wreck everything like this?”

“Today’s May 8th. Tomorrow’s May 9th. Anybody want to tell me the name of the fourth largest asteroid in the solar system?”

“Ohhhhhhhhhhhh …” came from the audience.

I can’t get over February fueling a growing sense of unease, and March bringing full-blown alarm. And now Joe fills us in on April and May. Fortunately the Martians put the brakes on their first incompetent (and, unknown to them, software-hacked) experiments with Amplified Thought after May 2020. Yet more uncanny events were slated for the human race, and the deep disquiet grew.

I seem to be asking compassion for the future. Is there such a thing?