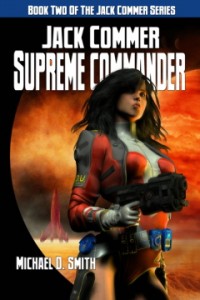 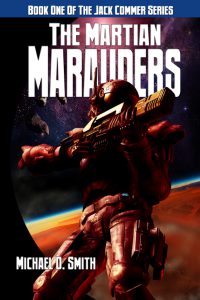 I suppose that could be a clever novel title if I ever do an eighth Commer novel, but it refers to the republication of my Jack Commer, Supreme Commander SF series. My publisher, Double Dragon Publishing, was sold to a British publisher earlier this month, and although I had a choice to continue with the new publisher, I decided I really want to self-publish the series so I can update the books, especially the first three, at my leisure. At this point I own the six covers and have new ISBN’s ready for publication by Sortmind Press.

I’d actually made my decision long ago and had already made extensive notes for updating this series. In 2018 and last fall I’d reread the entire series, and while I definitely see all six published works as a complete expression, each with its own valid soul, I was bothered by the overuse of italicization and some other stylistic problems in the first three novels. They’re still great stories but I found the style overdone, even jarring in places, as opposed to the smooth story-centered workings of the last three. 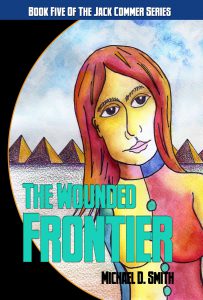 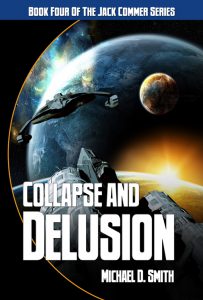 There’s also the vexation of finding typos in a published manuscript and having no control over their correction. Back in 2012 Double Dragon had generously allowed corrections of numerous typos in the first two books, but somehow during a 2015 re-upload of the files the original manuscripts and their errors were reinstated. Can’t figure that one out, but it has definitely irked me.

A further issue is the chronology of the series, which seemed radically distant when I began the first book years ago. Asteroids start falling into the sun in the spring of 2020, and more solar system disasters pile up through the twenties. Finally we get the Final War in 2033, which forces humanity to emigrate to Mars. A recent blog post bemoaned my series finally going out of date this year, reinforcing the lesson to set your SF stories decades, maybe centuries ahead. Which is one reason why the series jumped to 2075, with rejuvenated characters, starting with Book Four.

The problem is that much of The Martian Marauders plot centers on the timing of spaceships moving between planets in the solar system arrangement of June 2034. Although my spaceships are so fast that they don’t need months-long orbital mechanics calculations to arrive at other worlds, they do have their speed limits and the planets really are depicted at their June 9, 2034 distances. Pushing the entire series a couple more decades into the future would unravel all that. Doable, but a huge error-prone job, and the anxiety 2036 characters have in Book Four about the long wait for the 2053 cessation of time-scrambling warfare would be lost.

Recently I’d considered leaving all the chronology intact and marketing the series as “alternate history” with 2020 asteroid disasters and the resulting worldwide unease mirroring our COVID 2020 anxieties. But that stank even as I conjured it.

But when the news about Double Dragon hit last week I had an immediate and wondrous inspiration, seeing the chronology problem in a way I hadn’t considered before. I could use 2028-2033 as five years of apocalyptic unease, in counterpoint with dizzying technological advance, and keep the same chronology after that. Yes, in eight years the series will again be out of date, but somehow this all makes emotional sense. Since I’m ready to move on from Jack Commer, I want to polish up Books One through Seven, have them out there, and move on to more literary work. If I return to space opera I’ll make a new series.

The change from Double Dragon also clears up a problem I was about to address with the publisher, namely, how to proceed with the seventh and last Jack Commer novel, Balloon Ship Armageddon, currently in final manuscript polishing. I’d figured Double Dragon was about to close and had already decided to self-publish BSA through Sortmind Press, but it was a relief not to have to do any back and forth with the publisher about Book Seven. Knowing I can proceed with the novel on my own terms, with my own cover, is a great boon. I’m not sure where Balloon Ship Armageddon will come in the new updating. I really don’t want to wait until Books One through Six are all done, though that may be the most logical path.

I’ve scoured sortmind.com and blog.sortmind.com for all mentions of Double Dragon as well as buy links to Amazon, Barnes and Noble, and other venues. I didn’t revise the history of the novels or mention of normal publication news over time, though, just removed incorrect links.

It’s funny how the Double Dragon change, in tandem with the Balloon Ship Armageddon finishing the Jack Commer universe, has made me realize how important the series has been to me, including its weird eighth-grade origin. Yes, it’s space opera, but I’ve also explored a lot of my literary territory here. And now I’m seeing a closed circle which I want to perfect.

Publishing all seven is going to be a big task, but I accomplished stylistic revisions of The Soul Institute and CommWealth fairly easily the same way earlier this year. Above all I want a calm, centered, orderly process, and in the meantime I must get started with some new writing. It’s not unreasonable to think I could publish one of these novels per month. And exactly as with The Soul Institute and CommWealth, I’m changing the style of the first three books, not the plot or the characters. In compressing the first thirteen years of the chronology to five, I’m changing a few things people say and some explanations, but that won’t affect the structure of the books. I’m not about to start rewriting the novels. I have full trust in all seven of them.