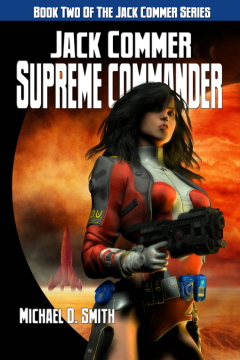 Jack Commer, Supreme Commander, the second of four novels in my Jack Commer science fiction series, has just been published by Double Dragon Publishing as an eBook in a variety of formats, all of which can be downloaded from the product page at Double Dragon:

The eBook sells for $5.99, but as long as it remains “new” the price is $5.09.  It’s also available from amazon.com, barnesandnoble.com, and itunes.apple.com.

A paperback version is also available from the Double Dragon URL above or the novel’s product page at lulu.com.  This is a Print on Demand–POD–paperback.  Lulu.com does an excellent job–the copies I got from this site for the first book in the series, The Martian Marauders, are truly classy.

A series of inexplicable solar system disasters in the near future of the 2020’s, including exploding gas giants and asteroids hurled into the sun, forces a panicky acceleration of space technology, including the discovery of Star Drive, which accidentally sparks a war between the remnants of Sol and the fascist, insane Alpha Centaurian Empire.

After the destruction of the Earth in 2033, humanity evacuated to Mars and fought against native Martian terrorists until Captain Jack Commer and his new bride, planetary engineer Amav Frankston, found a way to reach an understanding with them.  Jack, just promoted to Supreme Commander of the United System Space Force, now leads a peace mission in his flagship Typhoon II to end the war with the Alpha Centaurians.  But his marriage begins unraveling under the pressures of his new command and Amav’s discomforting presence aboard his ship.  After an engine explosion strands the Typhoon four months from its destination, the crew encounters a derelict spaceship.  Its insolent, uncooperative human refugees proceed to brainwash most of the crew, including Dar, Emperor of the Martians, into worship of the Alpha Centaurian Emperor.

A month and a half later, all but three have been Converted: Jack and Amav, now estranged, and the emotionally damaged twelve year-old refugee Bobby.  These three, along with recently Converted ship’s engineer Phil Sperry, write their final, brutally honest diary entries just as the ship is captured by Centaurian stormtroopers and Jack and Amav are sent to be tortured on a barren planet.

More on the sortmind.com background page

How to Purchase from Double Dragon

At the top of the purchase page there’s a link for the iTunes store (for iPad, iPhone, or iPod touch). I also was able to order a copy through my the iBooks app on my iPhone. Otherwise, to get to the formats for Adobe PDF, Rocket eBook, MS Reader, Palm, HieBook, iSilo, Mobi Pocket, HTML, and EPUB, click the Add to Cart button.

Or click the Paperback button to go to the lulu.com POD page.

You’ll need to create a free Double Dragon account or log into an existing one before you complete a purchase. The process is similar to ordering a book through amazon.com (add to cart, then check out, then pay, then download).  Once your purchase has been completed, the eBook title is moved to your eBook Shelf.  From there you’ll see the option to download in the above formats.  Choose EPUB for most eReaders; Mobi Pocket is the format for the Kindle.

What’s nice about ordering directly from Double Dragon is that the novel stays on your eBook Shelf and you can download it again at no further charge in any of the different formats (except for the separate paperback version), as well as rate anything on your shelf.  So, for instance, you could have PDF, Kindle, and Nook versions if you wished.

The Cover (and the Ancient Crude Cartoon) To the right is a cartoon I drew years ago around the time of writing the rough draft of Jack Commer.  It’s totally crude and I’m somewhat ashamed to put it on the same page as publisher Deron Douglas’ excellent cover above, but he did ask me for my input and I suggested that Jack’s estranged wife Amav be featured.  Then I sent him this image just for grins–but I was pleased to see that my 1950’s spaceship (which doesn’t resemble the Typhoon II at all) made it to the cover, much more elegant in his version.  As for Amav–it’s really her!

Any comments you might care to make, positive or negative, are welcome!  Any and all input will help me keep improving.  You can use this blog post, the book’s amazon.com page, barnesandnoble.com page, or Goodreads page, and I’m sure there are hundred and hundreds of other places none of us even want to think about right now. 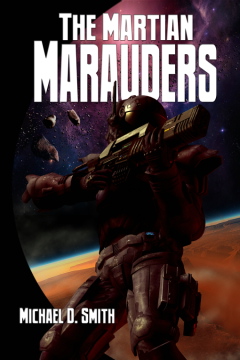 The first book in the series, The Martian Marauders, was published by Double Dragon in January 2012.  It’s available as eBook and paperback at Double Dragon, as well as from amazon.com and barnesandnoble.com and in paperback from lulu.com.

In the near future of 2033 humanity hasn’t learned much from Mars exploration and the recent discovery of Star Drive, and by 2033 the United System Space Force has not only wrecked the earth with the planet-destabilizing Xon bomb, but in evacuating the remnants of Earth’s population to Mars, has also somehow overlooked an indigenous, intelligent race which now mounts a terrorist campaign against two billion shellshocked humans.

Jack Commer, Supreme Commander takes up the story in February 2035, eight months after the end of The Martian Marauders.

Double Dragon also has the third and fourth novels in the Jack Commer series in the pipeline: Nonprofit Chronowar and Collapse and Delusion.  I’m brainstorming about a fifth Jack Commer novel now.