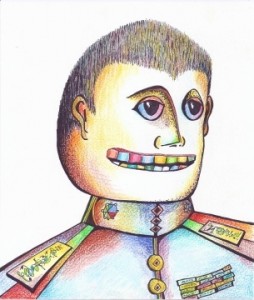 “But can’t you see, Jack, that’s your whole problem, man,” Borman cried, clearly agitated at Jack swinging the shattergun. “You’ve always been so repressed around women that you’ve let this Amav take over your sense of self-esteem. If you’d only actualize your potential, Jack, and learn to recognize those parts of yourself which–”

“So you’ve sobered up pretty fast, Lieutenant,” Jack mocked. “Back to your self-help clichés now, I see.” Unbelievably, Borman had recently gotten a publisher’s contract for a self-help book for men called The Sexual Conquest of Your Inner Mount Everest. To the entire crew’s chagrin he’d printed paper copies for everyone. Jack had read part of one chapter entitled “Finding your F-Spot” and had thrown the thick manuscript away.

That a chunky fighter veteran of the Alpha Centauri conflict was writing self-help books on the subject of male sexuality was beyond the comprehension of any of the crew, and it had only come out haltingly, over a period of months, that the other five members of the Typhoon II admitted that they’d thrown their manuscripts away unread. But Borman had become more and more egotistical about his book as the mission got closer to launch date. He’d even given copies to Amav and the three Martians. Amav never said a word. Dar had briefly commented: “You humans are one million years behind us.”

“Okay, Jack–just–okay,” Borman swallowed. “We all have our hang-ups. I know I did, once. But I learned, Jack. I went inside myself, I took the dare, and I climbed my own Mount Everest! I’m here today to tell you that if you’d only climb your own–”

“Getting sorta nervous, Lee baby?” Jack sneered. “You’re kinda thinking that old Jack boy’s just crazy enough to turn you into a pile of broken glass? Huh? Well, Lee baby, maybe I am just that crazy. Maybe I am …” It was so exciting to hold a gun on the criminal Borman! To feel his finger caressing the trigger, with more and more pressure! For once everyone would know–know that Jack would express himself! Fully and finally express himself! God, it would feel so good, such a sweet release of all the hate and tension and anger and fear!

The second book in the series, Jack Commer, Supreme Commander, is available in eBook and paperback format from Double Dragon Publishing, Amazon, Barnes and Noble, and other online retailers.