Author Toni Sweeney just posted the following reviews of the first two books in the Jack Commer series, The Martian Marauders and Jack Commer, Supreme Commander, and she’s nailed the dynamics of both novels in a way that I don’t think I’ve done myself. In some strange way these reviews almost make me feel that all this writing effort is somehow worthwhile! I say this tongue in cheek, but there’s some truth to it.

The Jack Commer, Supreme Commander series might be classified as space opera but I always want that psychological exploration in the foreground. And also the humor; my favorite feedback is to watch someone reading my stuff and laughing out loud. Most reviews of the three books published so far in the series have picked up on these qualities, and all have been illuminating for me. On to Ms. Sweeney’s reviews: 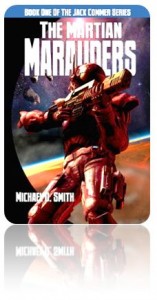 This was a very difficult book to review, not because it isn’t good, because it’s definitely that—in fact I liked it so much I went on to read the second book in the series—but because there’s so much going on. It’s like trying to watch three ping-pong games at once. Summarizing the plot is just as complicated…

Earth is currently in the Final War with Alpha-Centauri. Pluto and several of the outer planets have been pulled out of orbit and destroyed, the moon is gone, and after removal of all its inhabitants to Mars, the USSF (United System Space Force) has demolished Earth and made it uninhabitable.

In the center of this chaos are the four Commer brothers. There’s Jack, the eldest, a 30-year-old near-virgin with daddy-issues. Jack’s also captain of the Typhoon, and had the dubious honor of dropping the Xon bomb on his home planet. Second brother Joe is co-pilot of the Typhoon, a womanizer who likes to brag about his conquests, and in doing so wonders if he might have let Ms Right get away. Then there’s Jim, and baby brother John Jr., who, it appears, would be more at home on a psychiatrist’s couch than as the pilot of a battleship. John Jr. won’t obey direct orders, talks back to his commanding officer, has an attention-span of zero and apparently the only thing between him and a court martial is his senator father’s influence. In fact, John Jr. shouldn’t be trusted with anything more dangerous than a toothpick, as later actions will unfortunately show.

Immediately, the Typhoon and her crew are given a new assignment which coincides with their deployment on Mars. Confirmation has been made that there was indeed a Martian civilization and several groups are protesting further “destruction” of the relics and remains by Terran colonization. Abruptly, the Earthlings find themselves not only worrying about further attacks from Alpha-Centauri, but also from the Martians who now appear, led by a very disgruntled traitorious earthling named Sam Hergs, an anti-space protester and petty criminal gone big-time, who’s declared himself their Emperor. The Martians are able to share a collective mind which begins to spill over into Earthling consciousness so Jack and the others are aware of what they’re thinking and what they’re planning…the problem is they simply can’t believe it and refuse to admit it.

The discovery that the devastated Earth is being terraformed for re-habitation by a group of scientists who elected to stay behind during the transportation, that they’re being assisted by the Martians…and the most beautiful woman Jack has ever seen is not only the daughter of one of the scientists (and a scientist in her own right) but has also been brainwashed to be the new Martian Empress further complicates matters. Jack’s in love, determined to win Amav for his own…and make peace with the Martians and save the solar system while he’s at it.

In spite of my rather rambling synopsis of the plot, I enjoyed this novel. As I said earlier, because of that, I went on to read Book 2.

I’ve read a couple of other reviews which were unfavorable but I have a feeling those readers were looking for something other than what they got, and perhaps didn’t quite “get” the story.

As for myself, I found the characters very complicated, indeed some times maddening, but always interesting. Their actions were so unlike those of the typical space heroes that I wondered if perhaps this was a satire in spots. Indeed, since a good bit of the exposition is through their thoughts—and what thoughts they are!—it could possibly be. Whether it is or not, intentional or not, The Martian Marauders is an entertaining, enjoyable, sometimes laughable, once or twice appalling, adventure. One warning, however (and a possible Spoiler), Author Smith has a habit of creating characters you may come to like…and then killing them. Be prepared.

In the second book in the Jack Commer series, as the title indicates, much to his sometimes dismay, Jack is now Supreme Commander of the USSF. He’s also newly-wed, and on his way to Alpha-Centauri for peace negotiations. It’s difficult enough being a surviving Commer brother. It’s even more difficult being newlywed. It’s a quadruple problem having your very intelligent bride on the same ship as you and one of your crewmembers lusting after her. It’s even worse when the Martians onboard can’t adjust to Star Drive and get violent and have to be sedated.

Jack has all five factors going against him.

When the Star Drive of the Typhoon II goes out and they’re having to use regular power to get them to their destination, the crew is bored and bickering, questioning themselves, each other, and their mission, until they discover an Alpha-Centuarian ship in distress. Aboard are a group of humans ostensibly escaping their massacred colony. Among them is a twelve-year-old who’s so catatonic he can only communicate through writing science fiction short stories set during Earth’s War Between the States. The adult members are, for all extents and purposes, converts to the Alpha-Centaurians, stating they are returning to Earth, not as refugees, but to convince everyone that the aliens are not the villains they appear, and Earth should surrender rather than negotiate peace.

Whatever the fugitives have seems to be contagious, for one by one, the crew members succumb to their rants, raves, and prayers, and defect…even the Martians and Joe. Alone in the Typhoon II with only his wife and the boy, Bobby, Jack wonders how long he can hold out. He begins to question everything he’s ever thought or believed… and then another Alpha-Centaurean ship appears…and this one isn’t seeking peace or converts…it simply wants Earth’s destruction…

I think I liked this novel better than the first. It’s full of the irreverence, satire, and whirlpool thoughts of the first but even more so. Again, it’s another which really can’t easily be summarized…it has to be read so you can see for yourself. There’s a cliffhanger, but I finished reading with the supreme confidence that Jack Commer, Supreme Commander, would prevail…as he always does…

On to the next…

Reviews by Toni V. Sweeney, who seems to have written in every fiction genre imaginable