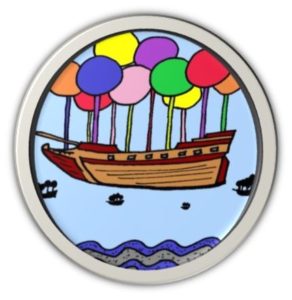 Alert to the Sortmind Blogosphere

I finished the second draft of Balloon Ship Armageddon, Jack Commer Book Seven, on June 22. While I wonder why I’m bothering to inform this vital sphere, which I suspect consists solely of myself, that I finished a Draft 2 of anything, I do want to record my satisfaction upon finally creating a coherent book structure out of a complicated and confused first draft.

Draft 2 cut ninety pages of nonessential secondary characters and six meandering subplot chapters, and the last fourth of the book required new writing and rethinking of the novel’s direction. Unusually for me, as normally even my second drafts are fairly messy affairs, I kept rereading and reworking all Draft 2 chapters as I was going through the novel, continually editing earlier parts to make them congruent with ongoing developments, so I feel the book is now well-focused.

There’s a lot of thinking ahead for a Draft 3, of course. While I could reread and finagle Draft 2 for a couple more weeks, I decided I needed to close this draft and move into the mindset for Draft 3, a vision of a finished novel. I may (or may not) plunge right into Draft 3.

The Premise of Balloon Ship Armageddon

The idea for a book to conclude the series originated with Jack’s wife Amav’s declaration at the end of Book Six, The SolGrid Rebellion, that they needed to mount a search for their traitorous son Jonathan James, who was murdered by an opportunistic rival and then reconstituted as one-third of a solid chromium pyramid. In Book Seven a wacky doctor in the Iota Persei star system separates him out into a lower class Wounded robot. Dr. Amy Nortel, however, is a Wounded robot herself, a member of a race that destroys entire solar systems for the thrill of stealing their energy. She also gloats that she’d been planted in Jack’s past as his high school English AP teacher.

Meanwhile Jonathan James rises to captaincy of Balloon Ship Armageddon on the bleak, Anti-Dark Energy sea world of Ailyuae in the Greater Magellanic Cloud, 163,000 light years from Sol. There he finally realizes he’s programmed to initiate a Wounded Trans-Simultaneity weapon that will destroy the Milky Way, and possibly the entire universe.

Another factor in announcing that I have a fairly complete seventeenth novel is that Balloon Ship Armageddon has been intended as the seventh and final book in the Jack Commer, Supreme Commander series. In positing an end to this series I wanted to open space for completely new writing.

Oddly, though, after finishing Draft 1, I found the best way to get a compact and satisfying Book Seven was to stop considering this novel any sort of definitive ending to Jack Commer, and no longer kowtow to dozens of series characters who were begging for some nebulous karmic resolution. Draft 1 was in fact littered with Grade B characters yakking about their desired series conclusions. Maybe, liberated from the obligation to happily end the greatest science fiction series of all time, some of those cut Draft 1 chapters and secondary characters could be part of a forceful Jack Commer Eight. Who knows? In any case they weren’t needed for Seven. 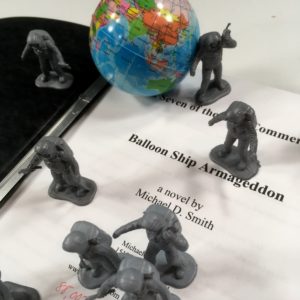 So What About a Jack Commer Eight?

Right now I have no urge to either forcefully declare the series over, or to continue it. Yet I see I’ve hinted at a future Jack Commer novel in Balloon Ship Armageddon’s ending, where Jack and several series comrades have just embarked on a dangerous mission to a multidimensional Uninhabitable Sphere of leftover karmic crap from the beginning of the universe. However, I seem to have left Jack with such a mindblowing assignment involving cosmology and the metaphysical source of good and evil that no Book Eight can possibly come out of that.