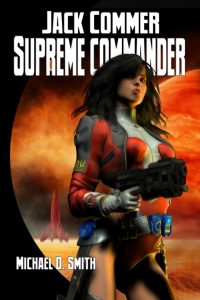 With the shocking suicide of spaceship Typhoon I, the four Commer brothers are reduced to two. After the Final War, the evacuation of Earth, and battle with Martian terrorists, is eldest brother Jack fit to lead the United System Space Force? He leads a peace mission to the fascist Alpha Centaurian Empire, but his marriage to planetary engineer Amav Frankston unravels under the pressures of his new command. He loses his crew to Centaurian brainwashing, and he and Amav are hauled before the dismembered Crab Emperor to face the Maximum Alpha Centaurian Torture.

As with all six books in the series, the reedited Book Two has no changes to any plot or characters from the first 2012 edition. The 2012 cover, an image by first publisher Deron Douglas of Double Dragon Publishing, originally lacked a Book Two designation, but over the years this cover has worked out delightfully as an image for the entire series, featuring as it does Jack’s intrepid wife Amav Frankston-Commer.

Several people have told me this is their favorite Jack Commer novel. In writing it, I worked through some intriguing emotional themes. Four of the chapters are crew diaries, each offering a different angle on the ongoing Centaurian attempts to convert Jack’s crew to worship of the Crab Emperor. As his Typhoon II personnel undergo alien brainwashing one by one, Jack Commer has ordered the surviving crew to keep diaries to track their mental states. But the diaries mainly probe or bounce off Jack’s shadow side as his confused, petulant, and even violent nature erupts in response to the crisis. The painful disintegration of his marriage is thrown into fresh light by his wife Amav’s last entry. And a near-catatonic twelve year-old boy manages to tweak Jack’s ego with one final science fiction entry which Jack uneasily dismisses as pornographic. 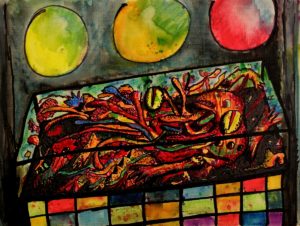 A dream of the dismembered Crab Emperor effortlessly slid into the novel. Definitely powerful, and probably worth some psychological analysis. Translated into the novel, the dream pinpoints the moment when Alpha Centaurian Ship’s Archivist Polot discovers the true nature of his beloved Emperor, with whom twenty trillion Alpha Centaurians are expected to remain in constant telepathic contact.

This same giddy terror was everywhere in the Receiving Hall. Where was the Emperor? The source of the Wisdom of the Grid? What the hell was that box doing there?

The faces of those standing near betrayed obvious panic. Most of these nobles and functionaries, like Polot, were seeing the Emperor for the first time. Others had been in previous attendance, but their demeanor, though more controlled, appeared no less disquieted.

At a signal from Glarzj the audience rose. Now Polot could see through the glass cover of the box. The Emperor was a Scihk. One of the revolting crab monsters from the Alpha X water world. Polot could feel the entire audience gag. That entire planet had been declared a forbidden Zone of Psychosis after the Chemical Wars seven centuries ago.

A woman next to Polot made the mistake of gasping: “Oh, flidpzxbck, what a pile of scluzzk!”

A Tarl guard instantly hauled her out of line and pulsar-tubed her head off. She collapsed to the green tile, which, interacting with a damaged organic being, secreted noxious chemicals that turned the rest of the woman’s body into twisted strands of blue gas.

Everyone pretended not to notice. Polot met the gaping eyes of Jack Commer. Then Jack, then everyone, turned back to … the Emperor. The Crab Emperor.

But the Emperor wasn’t a real Scihk Crab. He couldn’t be. The Crabs were five feet wide and stood four feet high on their six legs. This one looked like a Crab that had been cut up with a laser and shoved haphazardly into the purple box. Except that the creature was alive. Its yellow-orange legs writhed and thumped in that enclosed space, blood gushing through the moist tissue of scores of disconnected body parts. Every motion contradicted another. Nothing fit together. At times the creature seemed to be on the verge of thrashing right through the glass and flopping in pieces all over the floor.

One of the prisoners threw up. Two guards were on the woman Polot recognized as Sheila McCasland. Pulsar tubes appeared and flashed. Even as she hit the tile, two thirds of her blasted to nothingness, Sheila looked more complete, more at harmony, than the Emperor could ever possibly hope to be. She turned to blue gas.