Former space pilot Joe Commer inadvertently time-travels from 2036 Mars to wreck the first 2028 conference of the Committee to End Suffering on Planet Earth, scaring the nonprofit delegates with tales of the imminent breakdown of the solar system and war with a psychotic Alpha Centaurian Empire. Tormented by his role in dropping the superbomb that ended the Final War but rendered Earth uninhabitable, Joe has quit the United System Space Force, much to the disgust of his older brother Jack, Supreme Commander of the USSF. Meanwhile, in the audience, feckless young Urside Charmouth is horrified by the revelations, fearing that he’s ruined the universal timeline with his own drug-like Heuristic Time Transition experiments.

The cover, created for the book’s first 2013 publication by Deron Douglas, intuitively picked up on my central image for the novel, the evacuation of Earth after the Final War, with spaceships on the tarmac lined up to depart this planet forever. I’ve always been floored by the cover, not only by the 1950’s spaceship motif that reverberates with my earliest reading of science fiction, but by the evocation of my own vision of the opening scene for a hypothetical Nonprofit Chronowar movie, a scene hammering in the guilt Joe Commer keeps returning to in the third novel.

The novel focuses on the second Commer brother Joe, as well as new characters Ranna Kikken, director of the ludicrously hopeless Committee to End Suffering on Planet Earth, and the much younger Urside Charmouth, despairingly in love with her and journeying through time looking for alternative Rannas to love him back. The book, laced with Joe’s war guilt, does seem darker than the rest of the Jack Commer books, but it has always been an ambitious undertaking. The scenes of passenger shell disasters are still a little hard to take. So far this book has been the most difficult to reedit: not only with the series’ new compression of chronology from 2020-2033 to 2028-2033, but also with some fleshing out of a few topics; time travel can be rough!

Yet, as with all six books in the series, the reedited Book Three has no changes to any plot or characters from the first 2013 edition. I compressed the first thirteen years of the chronology to five, but aside from changing a few things people say and some explanations, the book’s structure is unchanged.

Heuristic Time Transition came into public consciousness with Amherst von Goertner’s popular book, Guide to Heuristic Time Transition in 2027. Von Goertner was a popular professor/writer on HTT and spiritual matters. He’d been researching the phenomenon since 2023 and claimed to have done 55 HTT trips. His influence peaked with his book’s publication and his resulting Internet blog, television appearances, and scholarly reviews of other books on the subject.

He was not an Alpha Centaurian plant but several Centaurian operatives were assigned to monitor and influence him.

Though many people claimed to have Time Transitioned, society as a whole treated the phenomenon like accounts of out-of-the-body experiences. HTT was basically a rumor and a fad between 2027 and 2036.

Then in 2035 physicist Anton Glasgow at the University of Mars published research claiming to verify Heuristic Time Transition as a real physical phenomenon, though his investigations were limited to quark behavior. Even then, other scientists considered HTT merely a theoretical possibility.

But beneath all the controversy was the fear that some time-traveling bozo was eventually going to destroy the universal timeline. The fear was not unfounded, because Heuristic Time Transition was designed to produce precisely that result. The Alpha Centaurians just naively assumed that all such extinction would be limited to Sol. 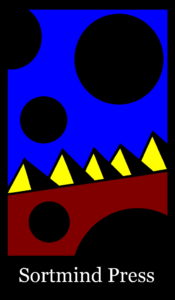 Italicized Thinking at its Height

To say that I had overused italicizing thinking for many years is quite an understatement. I often wonder where and why I picked up this habit; all I can remember is thinking that it was adding some sort of spice to my fiction. Well, some occasional italic thinking can bring out new flavors, to continue this rather awkward metaphor, but nobody wants you to dump half a carton of salt on your novel. The first three Jack Commer novels simply had too much of this spice, and it seemed to reach its apotheosis in Book Three, marring its drive and vision.

I’m still amazed at just how much italicized thinking, CAPITALIZED ASTONISHMENT WORDS, and … babbling … ellipses–and hyphens–2013 Nonprofit Chronowar contained. There was so much italicized thinking to redo, in addition to the new series chronology having most of its effect in this novel, that I found I’d generated numerous new errors in my first reediting pass. Sometimes I’d review a redone paragraph and notice things like:

How she Ranna be allowing this?

Which hopefully I can laugh at. I have gotten quite humble about just how many errors you can leave in a manuscript with the best of intentions.

Chronology compression sparked some thoughts about how we could have developed massive new tech in the 2028-2033 period, especially considering that in 2020, very little of what I describe for eight years from now seems possible. There was one allusion to a possible explanation in the 2013 Nonprofit Chronowar, where USSF Public Relations Head Robbert Geswindoll, who worships what he calls Celestions, muses about new tech:

Formidable weapon, eh? Shatter-enhanced Electron Oblivion Sequencer, just developed over the last couple months. Our top engineer says the idea for it came to him in a dream. A dream inspired by the Celestions! Praise the Celestions!

I realized that the Centaurians’ attempt to manipulate time might have other unintended consequences, i.e., the leaking of their brilliant but often faulty technology into human science from 2028-2033. This actually stabilizes the entire series chronology starting in 2028. So I added the bolded paragraph below, where Alpha Centaurian refugee Polot tries to explain things to a very drunk Urside Charmouth, who’s inexplicably found himself at a 2075 party celebrating the end of all Heuristic Time Transition:

“Alycia told me about Alpha Centaurians. The war, how bad it is and all. Are you seriously saying they started all this HTT stuff?”

“My Chronowarp was just to view the past. Theirs was to participate, to destroy. They wanted to land in your rear and wreck your solar system before you ever had a chance to develop Star Drive. But they also got hold of my permanent HTT technique and took over lost souls, the way I took over Huey Vespertine.”

“You don’t believe they had hundreds of agents among you? That they made up the whole religion of Celestionism to brainwash people into becoming part of the Alpha Centaurian Grid?”

“Yep. One giant stealth maneuver! They even got to be buddies with your Central Asian Powers, and they gave CAP the Xon bomb.”

“They inadvertently gave you guys a hell of a lot more. Where do you think all this new high-tech stuff has been coming from the past few years? The AC’s were boggled when they found out that their Celestion BS was leaking AC tech to you guys! The AC versions were usually more primitive, like the Warp Transfer they’ve never gotten straight. But suddenly some Earth scientist wakes up from a dream about how to make Star Drive! The Zarj were horrified to watch you guys subconsciously getting inspired by all their own tech!”

“Look, man, I’m sorry, I don’t mean to be a jerk, I mean, sure I’d like to believe you, but I’ve seen so much the past few weeks, all this stuff about Mars and this Final War, and Alpha Centaurians, and I just can’t take it!”

“Right, right. Anyone would be utterly discombobulated, I’m sure. Especially if they’d been driving themselves batty for months experimenting with HTT.”

Urside opened his mouth. “I need more wine to process this.”