Sixteen-year-old Billy Bolamme, Junior Dropout Basketball League star, joins shamanic forces with Guenevere “Uni” Ryder, fellow high school dropout, art gallery receptionist, and unwitting accomplice to thirty thousand murders. Berserk at missing his five hundredth point in a row, ridiculed by radio announcer Frank Chester over the arena P.A. system, Billy batters Chester and ties him up, leaving him to stare at two armed hand grenades on his desk. But then Billy sees that he’s left the P.A. system on, and that his threat has been conveyed to ten thousand witnesses. He proceeds to blow Chester up anyway, then destroys the entire sports arena to erase all witnesses to his crime.

In addition to its Kindle format eBook incarnation, this short and bizarre exploration of psychological Shadow is now available in two paperback sizes: 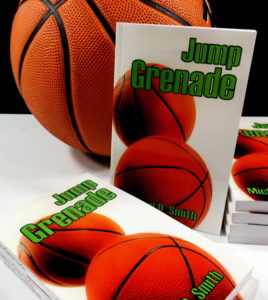 Billy is huge, meaty, and psychopathic. He wears camouflage shorts with a dozen hand grenades at his belt. His father Hiram, coach of the team, is an ineffectual, dreamy art gallery owner who started the Junior Dropout Basketball League with his wife Madeline, director of the Bolamme Center for Hurt Feelings.