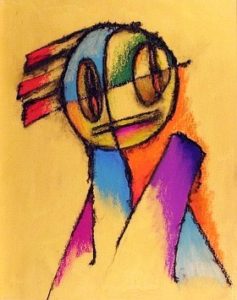 Peter Trantor regarded the lanky youngster looming out of the dim elevator with Suzanne at his side. “Well! Oliver! Glad you could make it! I’m Peter Trantor. Welcome to the command seat of the Trantor Group.” He waved at the expanse of windows showing the lighted towers of Canterra in the darkening sky.

Oliver Perrine stared back in consternation. Peter took in the disheveled strawberry blond hair and the suspicious deep-set eyes.

Go easy on him, Peter, Suzanne transmitted. He almost made a pass at me just now. Think he thought there’d be nobody in the building tonight. But he’s a good kid.

“Oh, right … hi there,” Oliver said, finally sticking out his hand to accept Peter’s shake. “I guess I’m here for the tour?”

“Right,” Peter said, pulling up subtext to Suzanne’s comments to the effect that she wished she were seventeen herself, and that she might even have responded to Oliver’s awkward approach. But his Vice President for Sales couldn’t know he knew this; Peter had reserved UnderDocument Mode to himself. 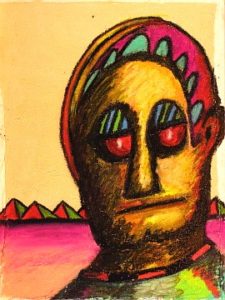 Sam’s February Paintbrush article, “In Defense of the OTF,” was considered rabid even on a high school campus which was probably ninety percent OTF supporters in the first place. Here was the son of one of the founders of CAT publicly suggesting that all CAT leaders might be better off “executed by the people” than left to their destructive, culture-destroying ways. He’d been forced to write an apology a couple weeks later, but nobody could tell if he meant it or not.

Sam was practically a professional, regularly getting his articles into the Paintbrush the past two years. Oliver’s crappy paintings were listless shit compared to that. Sam would be an important writer someday. 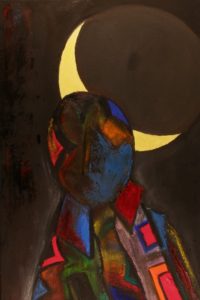 Anna Winstead. Could she possibly find him attractive? Hadn’t Margaret said he was good-looking? Something about his mouth and chin being “finely sculpted”? She’d told him that their first time in bed. Said he moved fluidly, “like a cat on a crowded mantelpiece.” Maybe Margaret thought she was a poet. But she’d done wonders for Peter’s ego. Up to the point where she took up with that Tad asshole. He couldn’t believe he hadn’t spoken to her in a year. God, she’d been everything.

Maybe if he worked out more. He wasn’t a beefcake. How could you be a beefcake at a hundred twenty pounds? Peter ate and ate and never gained an ounce. Did women really want beefcake? Could Peter possibly reprogram himself into beefcake? What would that take? Hell, this Winstead woman had been laughing at him. Laughing at him for being a cat on a crowded mantelpiece. She had a boyfriend and she was laughing at him and suing him even now.

Should he try to access all her JIS info again, see if he could make sense of it? He could feel tens of thousands of questions lining up in his spent mind. But what if he really was close to Mindwipe? What if Anna Winstead was the query that pushed him over the edge? 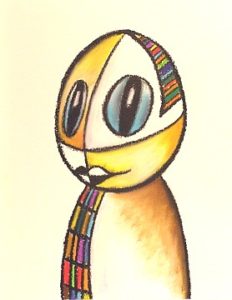 Peter stared. The woman was shorter than Suzanne, slight, her posture unflinchingly erect. She had fluffy light brown hair, pale skin, and intense brown eyes. Her small round face might have been pretty except that her cheeks were so full that she looked like a squirrel storing nuts. Peter fought not to laugh. For God’s sake, First Canterra InterBank had sent them a squirrel! What was wrong with him? God, if he could only think. 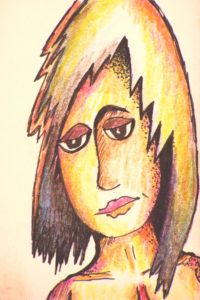 He felt as if he were seeing her from far below even though he was taller. Long honey-brown hair, eyes the matching color, a heartbreakingly serene oval face, magnificent jutting breasts in a shimmering earth-toned blouse, turquoise and silver New Mexican jewelry hanging from her ears, her neck, and her wrists. She held her chin high and looked away, disdaining the obvious leers of horny teenage boys and somehow, Oliver felt, making use of the nondescript little jerk to her left as a protector. Oliver looked down to her dark brown yoga pants crisscrossed with yellow lightning bolts outlined in electric blue. She was a gypsy! 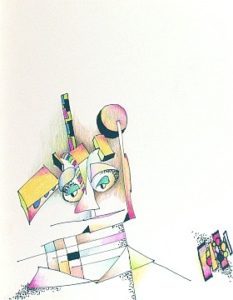 Mitchell Emersonn, architect and co-founder of Citizens Against Telepathy

Sam’s father leaned far back in his chair, swiveling lazily, chin sunk to his red necktie as he perused loose pages in his lap. Mitchell Emersonn was six-one, massive, barrel-chested but never flabby. He seemed twice the size of Oliver’s father. Yet everyone knew Randall Perrine was always in charge. He was like a German field marshal directing a surprise invasion of France. Nobody dared disrespect him except, of course, France, a.k.a., the legions of the Open Telepathy Foundation. About the only angry insult Sam had never considered hurling at his dad would have been something on the order of “Why do you always kowtow to that Perrine bastard?” That would be going too far. Probably, Sam ruefully reflected, because it was so true. 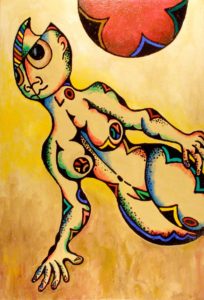 He couldn’t take his eyes off her. And he understood her–what she wanted from life, all her thoughts, all her feelings. She was sad. She seemed at once entirely representative of the human race and yet unique, transcending the merely human. She pushed the sheets away. She was gorgeous. She was different. She was special. She’d had it with uptight, controlling men, who wanted to hurt, who were worse than infants, who’d never found themselves, who’d never even looked for themselves. She was Shelley Bosworth. Age: twenty-seven. She wasn’t fully realized yet. Nobody was. But she was working at it. Why was she lying in that dump of an apartment? She was alone. She’d thrown out her boyfriend four months ago. The same time, he thought in awe, that he and Barbara had called it quits. Shelley wanted a man who cherished women, who was as straightforward as she was.