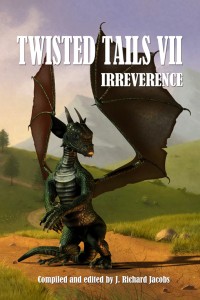 My science fiction story, “Perpetual Starlit Night” has been published in the anthology Twisted Tails VII: Irreverence, edited by J. Richard Jacobs and available from Double Dragon Publishing in eBook and paperback formats. The stories in this ongoing anthology all have twist endings, and I’m honored to be included among the writers of sixteen “twisted” stories in this edition. Past themes of Twisted Tails have included Time, Fantasy, Apocalypses, Aliens, and Fear. Volume VII is devoted to “Irreverence.” I think “Perpetual Starlit Night” seems irreverent the way old Twilight Zones were: that is, not exactly respectful of your everyday sanity.

In the story, Archeologist Sairjin ShiriKor arrives on a tiny artificial gravity platform in deep space to give a scholarly lecture. However, the barbarian colonists scoff at her evident delusion that she’s anything but a criminal sent to be incarcerated on the changeless and apparently motionless platform.

“Perpetual Starlit Night” was originally conceived as a novel and I spent hundreds of pages of notes on it until I realized that all I really wanted was the thirty pages which would’ve been the first three chapters of the projected novel.

To my chagrin I’d realized that the original notes for a literary novel more or less repeated what I’d already written in a previous long novel, The Soul Institute, and though I had an exciting opening for the  subsequent science fiction version, the notes for the rest of the book seemed vague and boring. So I just kept the opening. I recently ran across the projected contents for the novel dating from August 2006, and can reaffirm that the projected Chapters 4-11 were pretty dismal in concept: Notes for a novel have to be writable. There has to be a concrete situation, there have to be concrete characters and a concrete stage for them to act upon. I often start novels by collecting various notes I’ve accumulated over “the past psychologically meaningful unit of time,” then start sorting them, whacking them down and resorting as further ideas come into play, and I’ll toss in essays, journal entries, and recent dreams. Sometimes this process sparks a lot of imaginative leaps that do produce writable scenarios. But maddeningly, this method seems to fail at least half the time, and frequently leaves me thinking that I now have notes for a new novel, when in reality I just have a bunch of interesting ideas which don’t have novel legs.

“Writable” also implies: high level of desire to get on with the actual composition of the novel.  If I don’t feel an immediate urge to jump onto the novel (like, tomorrow), my notes are probably vague obligations about stuff I think I ought to write.

But at least I’ve become more aware of the pitfall of abstract idea notes; even when deep into a novel, I usually distrust the notes for the future chapters and if I’m writing well, I immediately see which notes are writable and which are just “stuff I thought I ought to be attached to.”

There’s also the semi-amusing discovery that my notes for a Part I are often ninety percent writable, ten percent abstract ideas, and notes for the final Part V are ten percent writable and ninety percent abstract. Notes for chapter 1: “Harold rides a nuclear-powered motorcycle across the Mercurian desert, vowing revenge against the aliens who attacked his solar panel farm.” Notes for chapter 40: “Warring factions of all planets come together.”

I’m not alone here. I could cite several recent long science fiction novels I’ve read that began brilliantly and concisely but wound up lost in bloated abstraction, even as the author kept straining to render his or her ideas into “novel plot” and “novel dialog.”

In any case, it was a relief to abandon the notes for a long novel and instead focus on the kernel of “Perpetual Starlit Night,” which I thoroughly enjoyed composing and which seemed to express exactly what I wanted it to.

The sounds of the feast faded in the concrete stairwell. Lieutenant Irkady insisted on holding her elbow as they turned up the stairs, around and around a core of empty space marked by chipped black railing.

After several levels Irkady pressed a button on the wall by a door. “We have a visitor,” he called through the door. Then turning to Sairjin, his eyes lost in her cleavage, he murmured: “If there’s anything you ever need …” Then he tromped all the way down the stairs. Sairjin waited by the red door. She finally heard Irkady open the ground level door below to a swell of guffaws.

The door opened smoothly onto a room ten feet on a side. All four of its walls were black glass. Sairjin could see the twin rows of landing lights outside, but the Platform was otherwise dark. Beyond were a trillion stars, Sairjin knew, but she couldn’t see them for the reflections of the room’s lights. Only the runway lights had any meaning out there. The runway where she’d come, the runway she desperately wished to depart from.

Then she noticed the woman at the desk. An older woman, hair done up high above her head. Wrinkled face, large nose, and the same tight gray-green uniform Lieutenant Irkady wore. She appeared to be in excellent physical condition, with quiet coiled energy. She regarded Sairjin with large brown sympathetic eyes.

“Please sit,” she said, gesturing at an orange chair. “I’m Shi Idnin, the Idninistritrix of this Platform.”

“I–I heard the air only extends a few feet above your head!” Sairjin blurted, disarmed by the Idninistritrix’s high melodious voice.

Shi Idnin nodded. “Yes, a lot of people find that slightly unnerving. It’s the nature of the MacPherson, of course. It generates our gravity and atmosphere, but it can only do so much. We’d gladly keep our 1G and settle for only thirty feet of air.”

Sairjin finally took the chair. “I … I’m Sairjin ShiriKor. Thanks for … for having me. I’m your first speaker for the Conference, but I believe various–delays–will mean I start late–”

The Idninistritrix studied a computer screen. “Yes … I’ve been told about this Conference of yours.”

Sairjin shot to her feet. “Excuse me, but I have to confess I’ve had quite enough of this … this rudeness! I came here to give a lecture to the Conference, but everyone is so … so unbelievably rude!”

“Well, it’s my job to break the unfortunate news to you that there is no Conference. There is no lecture.”

“Are you … are you kidding? Why didn’t they just tell me there’d been a change of plans?”

“There was no way to inform you. Sentence has been passed, I’m afraid.” The Idninistritrix looked at her printout in distaste. “But that it’s … this.”

“So it’s true, then! You’re barbarians! I can’t believe this! What are you even talking about? Why would you even advertise an archeological conference if you don’t even have the … have the civilized–the proper–”

“So it was an archeological conference, was it?” Shi Idnin said with a faint smile. She studied her screen again. “Yes, I see, fertility goddesses, and so forth. That would make sense, I suppose.”

“What are you saying? Just get me back to my ship and I’ll be on my way! This is unbelievable! I’ve been traveling for five weeks to get to this stupid conference!”

“I’m afraid … that’s just the Delusion you came with,” the Idninistritrix said slowly. “We all had it when we came. It’ll fade within a few hours. At most a day or two. Then it’ll all come back.”

“What’ll come back? I can’t believe this!”

“It’ll come back that there was never any conference. Never any lecture.”

“Are you crazy? I’m an archeologist! I have my doctorate from … from–” These barbarians have me so confused I can’t even think! “Talk to Knostner! He’ll know!”

“You’re not an archeologist.” Shi Idnin shook her head sadly. “It would certainly be comforting if our delusions were real, but … no.”

Sairjin banged her briefcase onto the Idninistritrix’s desk. Snapped it open. “I have my lecture in there, and the dissertation it’s based on! Knostner told me to take printouts because we weren’t sure what sort of projectors barbarians would have!”

But now she stared at a single bright yellow sheet of paper inside the open briefcase. She strained to read the bold letters upside down: I-N-C-A-R-C-E–

“Yes, I’ll need that sheet,” said the Idninistritrix, placing it beside her own printout. She pulled on a pair of glasses and read both documents. “It’s … really too bad. Whatever possessed you to think you could get away with this line of work?”

“With … with … with archeology?” Sairjin squeaked.

“There’s no archeology. Forget that. You might as well allow reality to surface.”

“That’s … that’s insane! You get my ship online and ready to depart this instant!”

“Your ship’s memory has been wiped. The ship itself has been requisitioned for the Platform as mandated by law.”

“Is … is this some kind of joke? Why are you barbarians playing with my head?”

“Sit down, please. You’re giving me a headache.”