Mike: Okay, Ms. Frankston-Commer, be careful coming through the door, you can slip on those shards of glass. I’ve got a broom here–

Amav Frankston-Commer: I see ’em. Don’t worry about sweeping up. I’m sure Kner will lend you some Amplified Thought to get Ballard back together in time for Chapter One.

Mike: Yeah, I guess. I just can’t understand how he keeps intruding on these other interviews.

Amav: Shadow stuff, again. I passed Jack on the way out. I told him he doesn’t need to worry about Rick bothering me. And he certainly doesn’t need to shatter him, for God’s sake! I admit Rick’s idea is provocative. Would me falling for the son of a bitch turn this series on its head! What a set of conflicts and plot disasters! But your analysis is right–it just couldn’t happen if Amav is to remain Amav. We pushed the envelope a lot with Amav going after Phil Sperry in Collapse and Delusion, but everyone knew all along that JJC’s new Grid was brainwashing her. So I got some Shadow lines myself there. It was fun. But we couldn’t use the brainwashing thing a second time. Rick is just going to have to do without!

Mike: So, how are you seeing yourself in Jack Commer Seven? Jack and I already spoke about how a plot of a parent seeking a runaway child is nothing we can really hang a plot on for Seven. We’re going to have to make some real changes in how we view both of you.

Amav: And that’s fine with me. I had a lot of scenes in both the fifth and sixth books that made me look like a moody bitch stewing in all sorts of emotional garbage, and that wasn’t the full me at all. Jack charmingly suggested that I was a force, which seems to be a good way of describing me–or anyone, for that matter,

Mike: Like the chapter title in The Soul Institute, “That Moolka is a Force,” where Derrick sees that his cousin and lover Moolka has become, for him, something far beyond even being a “woman,” that she’s an incomprehensible bundle of psychic force.

Amav: Exactly. Anyway, all in all the sixth book, The SolGrid Rebellion, was a good part for me. I got to run through being the moody bitch, the alluring sex object, the confused bystander, and finally the Dictator of Sol. At the end I’m also apparently the de facto controlling force in the marriage, but this last part worries me because it’s essentially inaccurate and does make Jack look like a clueless bumbler.

Mike: I thought we were seeing Amav make up her mind that there was unfinished business with Jonathan James, and that Jack and Amav finally had to start talking about it. It was awkward all around, but I think this was a moment where Amav had to take the lead.

Amav: She had to show her force. Fine. But the main thing we need to work on is having me and Jack have our own inner lives, our own destinies, karma, or whatever, and not simply be a Team Commer demonstrating how great the marriage really is. I agree that either one of us might take the lead at various points, but I don’t think the purpose of the book needs to be to extol how well we work together, which seems to be one of your notes for this project.

Mike: Right. We can cross that one out. The idea that you two are there to fly a saucer together and work hand in glove to find JJC is very limiting. Then again, having you careen off on separate adventures is repeating The SolGrid Rebellion. We’ll have to see if there can be some plot developments where both of you can have major roles. In fact this whole concept of how to deal with two partners of any sort in a novel is problematic. You put them together and there’s supposed to be no conflict because they have a certain level of friendship and intimacy. You split them up to have separate adventures and then they get together at the end and compare notes about how the whole thing went. Boring! I also don’t want to throw in Amav robots or doubles or the sort of thing that worked well for Laurie in The Wounded Frontier. I will be investigating what you and Jack both want at this point. I have to believe it would’ve changed a great deal over the course of seven books and over forty years. 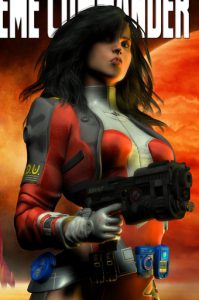 Amav: I do know that the marriage is good. Jack is it for me, always has been. But writing a novel about “the marriage” won’t work. Yes, we needed some communication repair by the time we got to the end of SolGrid Rebellion. Not only was getting through all the insanity of MATS and Carla Posttner and SolGrid, and knowing the son you had no real relation to was dead–sort of–or maybe just a digital concept in a pyramid now, not only was all that hugely changing my perspective, but simply being on the old Typhoon II, the place where Jack and I finally, really came together all those years ago, prompted me to finally speak up. Our son had stolen that same ship, but it had always psychically belonged to us, and now we had it back, and–what I said about us going after JJC just popped out. It wasn’t premeditated. The book makes it look as if I were in control, but in fact we were both overwhelmed and confused, and the truth of it all just popped out.

Mike: That gives me a lot of perspective on how to start seeing your journey to Iota Persei. You’re both uneasy with what you’re doing, and with what you might find, but you know there’s that unfinished business you’re responsible for.

Amav: I think that’s what’s coming out of all these interviews is the fact that all these characters are going to have to be looked at in ways you haven’t deeply considered before. Any plot that comes has to be there to develop these people. I think in the back of your mind you’re still hoping for the kind of plot blurb that goes viral on social media. Well, a cool plot is all well and good, but the point is the people. You know that, everyone pays lip service to it, but then we want the cool genre, the cool plot that can be summed up in a fifty-word blurb. I can see why you want to end the series and do more literary work.

Mike: Right. However, I’m committed to making an excellent, even literary, Book Seven. Yeah, we can call it space opera but it’s more than that to me. There’s a psychological aspect, even if it’s humorous, that’s the center of it. “Psychological novel” doesn’t have to mean “crime novel” or “mental illness novel,” either.

Amav: Anyway, so what we have so far is Jack and Amav, piloted by their robot dog Edward, flying a J-200 saucer out to Iota Persei. They’re calling it a badly needed vacation, and Amav’s taking a leave of absence from being the temporary Dictator of Sol. They’re leaving the clean-up of the destruction of Marsport to the Martians, though some people are saying that the two are skipping out when they’re needed most. Then again, they’re intending to look for JJC during this vacation, so in a way it’s not a vacation but possibly an ordeal. At the same time, they don’t really think they’ll find JJC at Iota Persei, but are hoping the Ywritt will have some insight. Then they see he really was at Iota Persei, and that he’s free of the pyramid now. Have I got that right?

Amav: You sound bored! But don’t be. That’s what we’ve got to hang some character motivations on now. Even if what I just described, which I assume is really more Chapter Two than One, seems dull, who knows what can develop out of it once we all get started? But another thing you haven’t really considered is the smart-assed MATS, and Amav’s problematic relationship to it.

Amav: What happened with MATS in SolGrid Rebellion was fantastic. I agree we can’t overuse MATS in Seven. I just have no idea how MATS will see any of what you’ve been working on for Seven so far. I also note MATS isn’t on the list of interviewees.

Mike: Right. I might interview MATS later. I figured twelve characters would be a good amount to get started. There are way too many throughout the series for me to even think about giving them all final resolution in Book Seven, but these twelve seemed like the best candidates.

Amav: I’m getting the impression that you think you can just wing it with me, that my status throughout all the books as some brilliant, super-sexy female is holding you back from really investigating me. Maybe you think that you can wing it with Jack too, just see what develops. Maybe that will work, maybe not. We can’t just be the married couple at the top of the food chain as we’ve been before. I can understand how you’re secretly fascinated by Rick Ballard’s magnificent new attachment to me. It would definitely wreck things most wondrously! But that’s a slapstick way out, and you’ve already done it before. The deep Amav doesn’t give a flip about Ballard, she doesn’t care that he’s taking more pictures of himself right now and emailing them to yours truly just as he did with Laurie.

Mike: What? He can’t be! Jack just shattered him not half an hour–

Amav: Amplified Thought only takes a microsecond, remember? Kner repaired him. But Ballard knows to stay out of the interview room now. And to stay the hell out of this novel, for that matter. Except for Chapter One, of course.

Mike: Well, you’ve given me more to think about. You’re right, I can’t just wing it with either you or Jack in Book Seven.

Amav: It’s the forces at work that determine everything. And there’s no set method to finding them.