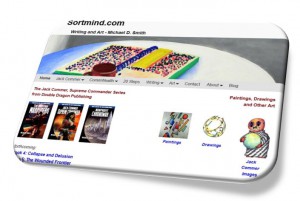 I’ve spent two and a half months moving sortmind.com from its ancient FrontPage HTML incarnation to WordPress–as a page-format site, not a blog. The new site focuses on the Jack Commer science fiction series, CommWealth, and other publishable novels, and on the best of my paintings and drawings.

While I developed a certain amount of web skills from 1999 to 2015, including HTML, css, rudimentary JavaScript, and a vast appreciation of image work and how much I still have to learn about it, the concept of maintaining static pages which could only be edited on whichever computer was still capable of running my prehistoric FrontPage 2000–which has since evolved to some other software whose name I can never remember–was definitely dead a long time ago.

I launched the site in October 1999 and it just kept growing. Even as I finagled and focused it, sortmind.com become more and more archival and unwieldy. Over the years I aggregated way too much, including hundreds of drawings and paintings I was happy to add at the time, but which overwhelm anyone looking through the site. I went far beyond the stated goal of showcasing some sample work.

I did restructure sortmind.com’s format entirely in 2014, playing up the Jack Commer series and giving the site a much more modern appearance, and I’m still proud of the glorious hassle of the months-long result. But by 2014 I had hundreds of individual pages, and if it can be believed I restructured them all one-by-one, employing vast checklists to keep track of the changes. I could have streamlined some of this effort by making fuller use of some of the software’s previous century functionality, but I was already saying goodbye to FrontPage 2000 with all its strengths and its messy HTML quirks, and it seemed fastest to just get the 2014 project done manually.

All along I knew my FrontPage editing techniques were doomed. The demise of my Windows 7 laptop and the fact that my Windows 8 laptop refused to load FrontPage 2000 was a definite signal from the universe.

This year the process of porting sortmind.com to its WordPress site has been technically educational, a functional plus for all future web work, and artisto-emotiono satisfying. It’s been like writing a mini-autobiography. In changing the site’s character from “archive” to “best work” I’m not only presenting a better web site but also freshly assessing my own writing and art history. 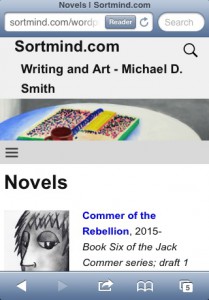 The mobile version seems pretty functional–a consideration unknown in 1999 at the start of this peculiar writer/artist web presence karma. Back then we worried if the page looked decent in both Netscape and Internet Explorer.

To get a picture of the contrast between new and old: the WordPress site has 47 pages, and I counted 321 images in its Media section. I can’t make a direct size comparison between the two sites because the old is a collection of static files and WordPress is a content management system database, but the properties of the master old.sortmind.com folder on my laptop shows that it’s 386 MB, with 203 folders and 5,459 files!

The old site actually does have some archival uses and lives on as a subdomain of sortmind.com at old.sortmind.com. But it’s frozen forever at April 25, 2015.

In any case it’s time for this Phase One to be done. Sortmind.com will continue to evolve, but I definitely want to concentrate more on my writing and less on being a webmaster.

There are obvious effects of the change for the blog, technically another subdomain of sortmind.com. At least the effects are obvious to anyone who’s dared to peruse the wild interior of these blog postings to encounter numerous dead links to former sortmind.com pages. I’m still going through the blog posts to update these links. I’m also–though extremely rarely–lightly editing various phrases that no longer make sense due to the structural changes in sortmind.com. I’m trying not to alter the content of any post, and if a major explanation is needed I’ll just add comments–just as if I were a visitor!

So far I’ve encountered a couple places where a link to the old.sortmind.com can’t be avoided, but I don’t want to indulge in that, because the first thing I’ll do when I start running out of storage space at my web hosting company will be to start sacrificing chunks of old.sortmind.com and then those links will die again.

Finally, the boilerplate blurb about why this site is called “Sortmind.” From the “About” page of the web site: 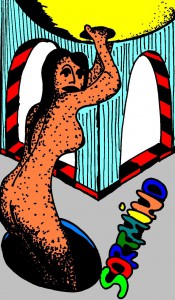 Sortmind is a novel I wrote about the Telepathic Database, urban architectural wars, and two sets of aliens with opposing ideas about how to deal with the human race. “Sortmind” is the name of the program that runs the Telepathic Database. I wrote the first version of this novel from 1987-1991 and thoroughly revised it 2007-2010. The novel is not where I want it to be and is currently awaiting yet another revision.

“The Sortmind Conversion Project” is such a nice title I might even rename the novel to that! But its thorough update isn’t on my radar right now.