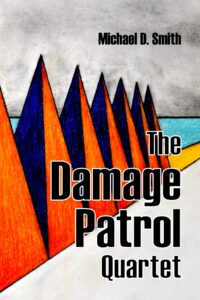 A feckless young architect falls in with a sixteen-year-old’s dubious trucking venture. Drug-addled Randy bemoans his fate as a slave employee in New Fascist Australia. An archeologist arrives on a tiny artificial gravity platform to give a scholarly lecture to barbarian colonists. And the Conscious Reach Corporation sets out to cure an entire city’s mental illness.

I don’t generally like short story collections. I prefer the long, developed narrative of a novel and don’t like the abrupt shifts to totally new characters and plot. When I see a story collection tacked onto an author’s list on Amazon, I figure they or their publisher just want to pad the list with lower-grade work.

But after listening to audio versions of two excellent Cory Doctorow short story collections (Overclocked: More Stories of the Future Present, and Radicalized: Four Tales of Our Present Moment), I was struck by how the stories strengthen each other. If they don’t cover the exact same theme, the stories share a unified tone and worldview.

So I was inspired to offer four of my best stories, similarly unified in their plot twists and dreamlike perceptions. They’re also an homage to my childhood writing in that, like many of my kid writings, they’re influenced by the Twilight Zone, one of my two great childhood inspirations, the other being nineteen-fifties Grade B science fiction movies.

I’d been hesitant about this project until I got into it, but this endeavor has turned out to be much more rewarding than I’d first envisioned. All four stories have been open to new edits and improvements, even the two already published elsewhere. As far as I can see there are no other stories to add, and no other story collections I want to do. I’m primarily a novelist, and think of stories as idea test beds or novel practice. So I don’t have that many stories since my college experiments.

I just received the first proof copies of The Damage Patrol Quartet, and I find the short book absolutely lovely, much more important to me than I expected when I set out to do this project in September. 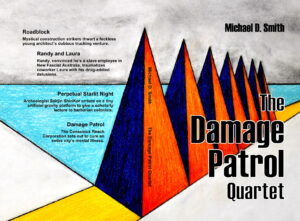 A feckless architectural school graduate falls in with a sixteen-year-old’s dubious trucking venture that takes them to the rural south in deep night. There they encounter a massive roadblock, and construction strikers with the power to eradicate all light.

“Roadblock” was originally a chapter in Zarreich, a sprawling, unpublishable rough draft novel that incorporated dozens of my most bewildering dreams, and which led an army of confused characters across endless psychic minefields. In this story, it’s pretty obvious that Oceanmouth is the perfect psychological dream companion.

Randy lives in the drug-addled delusion that he’s a slave employee at New Fascist Australia Toll Road Number One. Laura, who also works at the urban American gas station generating this fantasy, hopes to save enough cash at the menial job to escape both Randy and her tyrannical father, whom Randy worships as the NFA Gasoline Minister.

“Randy and Laura” also sprang from a dream, and would still work as a flashback to Randy Perrine’s bizarre past in my novel Sortmind, from which this story originated. But it would’ve merely been a long detour if I’d kept it in the novel.

Archeologist Sairjin ShiriKor arrives on a tiny artificial gravity platform in deep space to give a scholarly lecture. But the barbarian colonists scoff at her evident delusion that she’s anything but a criminal sent to be incarcerated on the changeless and apparently motionless platform.

A big plus to including this story in The Damage Patrol Quartet is leaving “Perpetual Starlit Night” as is, the perfect surreal story, no further explanations needed. Recently I’d had the idea of turning this previously published work into the first four chapters of a novel, and I came up with a fairly detailed plot for what would happen as Sairjin slowly accepted her inexplicable new life. But I’m not sure I ever deeply wanted to expand the story; it seems more fitting to have closure on it and put it out the way it is. In any case, having it here as a story doesn’t preclude later making it into a novel. I have to admit that something about the Shi Idnin character does beckon.

The Conscious Reach Corporation sets out to cure an entire city’s mental illness, one tormented soul at a time. IT technician Lucy earns a promotion to head the Damage Patrol unit, but her uncanny ability to reach inside the wounded and burn out their traumas leads her to the evil at the root of the corporation.

What can you say about a story that unfolded in half a second as you walked to lunch in downtown Dallas? What if you really had to update thousands and thousands of psychological messes? Who gave you that authority?