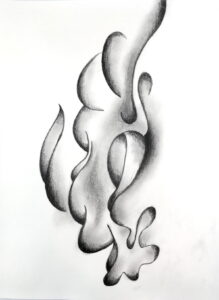 When I recently re-interviewed the main characters of Caspra Coronae, it became obvious to all of us that Walter’s evil machinations and his over-the-top, humiliating death were merely dull plot. And that in fact the entire Part 2 of the novel was dull plot. Worse, it besmirched some intriguing character development in Part 1. Music professor Marina Nicker Nunn, who herself got thoroughly lost somewhere in Part 2, then suggested I make a fifty-page Shakespearean soliloquy for Walter out of his endless Part 2 ruminations on his metaphysical nastiness, and I decided to take up her challenge. Well, it’s not fifty pages, and it’s not iambic pentameter, but possibly I can channel a little Walt Whitman. So Walter gets merged into another character and exits the novel. I hope that what follows is an honorable farewell to a character who’s been in this book’s planning for years.

Somehow, rendered into verse, Walter’s chatter becomes an overview of the themes of Caspra Coronae even as I’m cutting this verbiage from the book. It does tell a story of sorts. Meanwhile I’ll thoroughly restructure the book before embarking on Draft 2.

It was totally black. No lights anywhere.
I took yet another rest among the trees,
broken right ankle blazing with pain.
I was definitively not holing up with Dave
in some suicidal Alamo-type disaster.
In the end it was just common sense that convinced me
to limp out of there on my own.

For Caspra Coronae didn’t really want to murder all our remaining soldiers.
She was so much more compassionate than that.
It was delightful to recognize her as OverGeneral of the Reunion,
the mistress of all wise brainwashing,
when all this time I’d worried where I’d fit in the hierarchy
and what cruel Master might squat at the top.

Surely the omniscient, luscious Caspra had forgiven me
for trying to rape and kill her, hadn’t she?
After all, wouldn’t a low-level Reunion agent like myself
naturally think it my duty to celebrate newfound Merge
via ritual murder of a brainless albeit sexy addict?

The enlightened and compassionate Goddess
must’ve understood I’d been overexcited by my new powers.
Certainly my continual ballooning of Merge was Caspra’s way
of offering Full Enlightenment to her most loyal subject.
For wasn’t she signaling to me, and indeed to all the Reunion,
I understand and love you, my darling irreplaceable Walter?

Yes, why wouldn’t the OverGeneral invite me to her bed
in celebration of her imminent victory?

In any case my Merge was really starting to work now.
Dave was certainly no match for Caspra,
and in a few hours he’d be freaking
as fifty thousand Reunion soldiers closed in on him.
It would’ve been interesting to Merge with the bastard
because sometimes I could get into the guy’s head
and snap some inner switch even I didn’t understand
and Dave would babble and I’d manipulate him for hours.

Caspra obviously wanted me to set up Reunion Headquarters.
I’d offer Dave’s giant art warehouse for this purpose
and Caspra would be quite pleased
with this gesture of total obeisance to her.

After all, as Dave’s addict
I was part-owner of that warehouse with all its lovely abstract paintings,
and once Dave was dead, there were legal precedents
for the property to be fully deeded to the bereft addict,
especially in the light of the addict’s excellent growing Merge
and his infinite faithfulness to the Reunion.

There was the dark warehouse; would I need a key?
Or would Caspra telekinetically unlock it from afar?
Or was she waiting for me there now?
Surely I could get a least a cheap bottle of wine from a drugstore.
Maybe some fairly decent cheese, and crackers?
Also a couple boxes of ribbed, lubricated condoms?
On the other hand, wouldn’t the OverGeneral of the Reunion
laugh at the need for condoms?
Who cared about STD’s or pregnancy
now that final victory was at hand?

In fact, it might well be that Caspra wanted
to bear my son and groom him as the next OverGeneral.
I didn’t mind not being OverGeneral myself.
What a thankless task that would be.
Simply being Caspra’s eternal consort would be enough.
Of course fathering a line of Reunion OverGenerals definitely had its appeal.

I raised my right arm in stiff salute to the Goddess herself.
For surely that was Caspra up there singing out her blessing:
For you are to be Merged into Reunion, dear one.
This does involve the cessation of your consciousness.
You resist me? You refuse my voluptuous body in bed?
You refuse my shells and bombs penetrating your pretty paradise?

I hadn’t thought my Merge was that extensive yet.
I didn’t know how I could know so much in such detail.
The stress of impending death
propelled me to higher levels of Merge.
But the chilling thought came that maybe
this was how Caspra removed Merge
as punishment for all my broken trust with her.

Would I come out of this with an obedient, spastic body,
but no conscious soul? Would I even care I was alive
after Caspra Coronae shoved me into ecstasy
and scooped out my brains and adorned herself
with the remnants of my junior varsity Reunion glory,
leaving raw void for me?

How should I regard having every thought examined
and then feel that thought’s exact opposite,
its negation, jammed rough into my mind,
demolishing my entire structure
in an ever-growing flood of insanity?

I looked down at the 9 mm pistol
and thought of doing the job myself.
So much less panic in the end.
Easier on everyone.

Yes, I’d always been the outsider,
never quite competent enough
to truly be a part of Caspra’s Army of the Reunion.
Instead I was delegated to spy duty,
the most menial task in the hierarchy.
Spies had to repress themselves, act at least marginally good.
I was terrible at it so I went around killing people and screwing things up.

But now I sensed trouble in the Reunion ranks.
One division had pulled out of the attack to senselessly maraud east.
Other troops began to fire upon each other.
There were riots behind me,
and shells of blue-green gas landed on friendly forces.
There were mass desertions as I reeled with the intensity of my own Merge.

New shells shrieked down and exploded.
Acrid smoke rose, and homeowners fell all around me.
Hundreds of tanks churned ahead of machine-gunning troops,
plowing up houses and trees as searchlights whipped all over the sky.
And I saw that the puffy blue-green explosions were God.

For I was touching God as He came to the opening battle of the Apocalypse.
I watched the hand of God move over the battlefield
wiping out life wherever it lingered,
rolling the tanks over the trenches, raising the proud hallucinatory gases.
I knew I’d united everything, I the spy had united all the Reunion,
all their fracturing armies, I knew them all, I read them all.

But even I was surprised to recall
the techniques I’d used to insert myself into Dave’s mind.
How easy it had been to paralyze his thoughts,
to know precisely where to reach in
and make the son of a bitch as evil as me,
to make him worship death and dread the same way I did.

I had the switch in my grasp but dared not touch it.
Gaps in the Merge kept that particular horror from me,
had prevented me from knowing that she intended
to perform the highest torture on her most loyal lieutenant.

Loyal? Hell, no, I’d run from Caspra. Betrayed her.
Why had I never been able to obey my Goddess?
I tried to rip into her mind but found a solid white egg at her center,
impenetrable, twenty miles across and weighing millions of tons.

Then why wouldn’t I remove my own Merge?
Surely as part of Caspra’s army I had to execute all her commands.
But maybe I was following them,
maybe I was unraveling my own Merge according to her plan from the start.

Thousands of muzzle flashes lit the gloaming sunset.
It was lovely, hypnotic.
Bright shell explosions blossomed everywhere.
Just one shell, I prayed, one shell to strike this tower square,
to wipe this dying ember of civilization.

A final ray of sunset shot through the stone towers
floodlighting my blackened toad face
as I invaded that celebration to strangle all minds.
Screams and booms and muzzle blasts merged into worldwide roar,
and I rose to the center of the entire short-circuited universe,
for now an entire army came to me,
white Reunion men tossing grappling hooks,
hoisting themselves to the next level, then the next.

I controlled them all, my mind slipping into their patterns,
accelerating faster than I’d ever imagined they could.
I had no idea what to do with the power I had over my people,
I knew I could fly right out of here, fly right off that balcony,
and my unconscious commands would spool out on their own forever.

There was spine-freezing predation in the beast’s dark eyes.
Everyone knew I could regain complete control,
could exercise my full terrible Merge,
the speechless horror it created in all those I touched,
the grisly things people had done
even while sickened to perform them in my name.

Sure it was a game; there was nothing magical about it.
It just took time and attention and energy
to figure out how to dig into a loose mind
and flip it your way in seconds.
The fraud works because deep down we all want it to.

I flowed into them all, suggested the scam, sprang the change.
Thousands of bullets traced hot vectors through me,
negating every thought and memory,
each bullet a particle of matter canceling
its corresponding particle of antimatter within me.
I spread further and further into the cosmos.
So it was peace to remove my Merge.
I never would’ve guessed that.