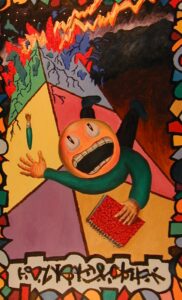 t was eight o’clock. All was well, except that the Animals had somehow crept into the Selector Box and short-circuited the entire Darwin Building. As the Selector, it was my duty to investigate. Yet, at eight o’clock, I’d just finished keying in my report, which said “All is well.” Once I’d sent it, I couldn’t very well change it, could I? Well, I hadn’t actually sent it yet. The system had gone down when we lost power. But the report had been stored before the Selector Box went out, so all I had to do once we straightened this mess out was push the SEND button. By the time we got the power back on, all would be well and my report would be true. The downtime would show up on some statistics at the end of the quarter, but nobody would have to know it was due to the Animals, and nobody would probably care anyway. I wasn’t about to change my report for any Animals, that was for sure.

It was spring. The Darwin Building had been completed four weeks previously, and it towered above downtown Zarreich like a giant electric toothbrush. At least that’s what all the architectural magazines said when we’d opened, and they had to know. The Darwin Plaza was covered with pebbled concrete, which we’d by now determined was the cause of our problems. These pebbles proved to be an ideal breeding ground for the Thankless Animals in this muggy spring. We’d originally called them Thankless Animals because the first night the building had opened, the four of us on duty–I as Selector along with my three peon clericals–noticed that when we tossed huge chunks of dripping red meat at the Animals, the Animals simply absorbed the meat into their bodies through their paws without even using their eyes to locate the meat. They didn’t look at us, appear happy at the prospect of a meal, or acknowledge our presence or the meat’s presence in any way. They simply absorbed the meat as they walked over it, never breaking stride.

That first night McHurty was simply amused. The next night he was dead. One of the Animals had gotten into the building and absorbed him. Flashg was with McHurty and saw the whole thing. In fact, Flashg had been petting the Animal when McHurty had walked over. McHurty had “just been sucked into the Animal,” as Flashg described it, and two of Flashg’s fingers had also been absorbed. Later that night we discovered an Animal-sized hole in the side of the Darwin Building.

We didn’t call them Thankless Animals anymore, because that had been a joke, the kind workers make to pass the time. Now we just called them Animals. In my reports I simply said “an animal,” trying to make it sound like it could be a dog or a cat, something like that. No reason to excite the Central Politburo, after all.

But the Darwin Building now had hundreds of Animal-sized holes all over the first floor. The lobby and the elevators were full of holes. When we came in for work at seven PM, at dusk, we’d see the furry gray creatures padding about on their business. They never took notice of us.

We’d never gotten a replacement for McHurty, so we were short. And Flashg was constantly upset about his fingers. He couldn’t work the Laser Processor anymore, or at least claimed this was the case. And the other night clerical, BGGTY, was so terrified of the Animals that it was generally all up to me. BGGTY and Flashg would sit around trembling and complaining all night while I got the work done.

Strangely, the day staff of seven thousand never complained about the Animals, which had been seen throughout downtown Zarreich at all hours and which, it had just become known, had so seriously weakened the First Insurance Bank that it had been condemned as unsafe a couple days ago and boarded up. We expected it to fall any day now.

So far the Animals had been smart enough not to fool with the Selector Box, though. They probably knew that the Selector wouldn’t tolerate any interference there. I’d been keeping pretty good track of the Animals and feeding the data into the computers, and we could all see that the Animals pretty much contented themselves with concrete, glass and steel, and occasionally plastic and leather upholstery. We didn’t worry about the electronic switching system with its miles of wiring and circuitry that was the nerve core of the Darwin Building, its communications lifeline and its raison d’être. But now evidently the Animals had gotten into the Selector Box. I couldn’t understand how they thought they could get away with this, so I had to assume that it was just a misunderstanding on their part and that we could persuade them to leave the Box alone.

The shaft was dark, but the Selector Box still retained a mild phosphorescent glow from the accumulated energy buildup of its four weeks in operation. I pulled out the only tool necessary, my two-foot-long screwdriver with its built-in flashlight, and I played the beam along the circuits of the Selector Box. Sure enough, behind a small auxiliary computer four gray Animals nibbled on exposed wires. It was the first time I’d seen them use their mouths and teeth. All other damage had been accomplished through the use of their absorption paws. The thought hit me that maybe their use of teeth was an attempt to generate some sort of mythological terror. If so, these Animals were failures. They didn’t scare me in the slightest. Then I had the disturbing thought that I normally never have any thoughts about mythological terror. Why should I be having any now? I tried to shrug the odd feeling off.

One of the Animals turned to me and smiled.

“Listen, we’ve been meaning to have a talk with you for a long time,” it said.

“Put down that screwdriver,” said a second Animal. All four ceased nibbling. Curiously, now that they’d stopped, their paws began to sink into the slabs of the Selector Box, absorbing their way through the metal and wires.

I held the screwdriver at my hip like a lance. “Some other time,” I bantered back. No Animals were going to get the better of me.

“He won’t put the screwdriver down,” said another Animal.

“Pity,” said the first Animal, with a supercilious smirk. The four Animals had now absorbed their way up to their knees in the Selector Box.

“C’mon, what’re you critters doing in the Selector Box, heh-heh,” I said, trying to get these Animals to laugh or something, maybe see the whole thing as a joke and get out. Repairing the damn box was going to take up the rest of the night anyway. If I could get these Animals out of here in short order, I could get down to work.

“We live here,” said an Animal. They were now sunk to their chins in the Selector Box. The phosphorescent glow of the Box had been fading all this time, and now it was as dim as a blown-out match.

“Flashg and BGGTY are dead,” said the first Animal, his smile protruding from the lifeless circuitry of the Selector Box as he sank still deeper with his mates.

“We absorbed them,” said another Animal.

“Nothing,” agreed the first Animal.

“Are you going to put that screwdriver away or not?” said another.

“I don’t think so,” I said. “I’ve got work to do. And if you boys’ll just move on–” I waved my hand in the direction of oblivion.

“Most certainly,” said the first, supercilious Animal as all their ears and tails sank fully into the Selector Box, leaving Animal-sized holes.

All the lights in the building came on. The Selector Box glowed with thousands of rainbows.

“Well, that’s that,” I said. The rope that Flashg and BGGTY had been holding for me was nowhere in sight. Or rather, now that the lights were on up and down the entire elevator core, I could see it falling noiselessly down the shaft into the square black hole beneath me.