What is This Thing? 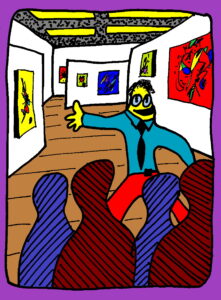 There were no longer any issues blocking the fiction, and I began Caspra Coronae on June 24. I finally realized that although my plans are incomplete, whatever is unresolved is just going to have to come out during the fiction process. After work on four chapters, it already feels like an entirely new novel, not just a revision of its forebear, the incomplete Notice and Dream Topology, and that version’s older rough draft, Parts I and II.

Nevertheless, right now the only way I can describe this experiment is to quote from the previous novel’s description on sortmind.com:

In Part I a naïve and disconnected artist gives a party to celebrate his career, only to find himself drafted that same night into a mindless war. In Part II he becomes a sergeant leading frightened yuppies against an unstoppable Army of Evil. A partial second draft, Notice and Dream Topology, was revised into a play titled Linstar, which unfortunately proved to be a bombastic failure. However, Notice and Dream Topology, in cutting out Part II, the interminable war itself, has some promise and I may revise it. And I might want to write a completely new Part II.

I don’t have a web page for the new novel and won’t do one until I figure the book out, at least to some degree, after Draft 1. I also haven’t drawn any character portraits yet. But I do have the image cropped from the Tarot Card for Notice and Dream Topology, artist Dave showing off his new art warehouse.

Oddly, the book I’m working on is already 263 pages in length. While I’ve significantly altered the ancient Notice and Dream Topology manuscript with new characters, new chapter divisions, and numerous cuts and rearrangements, in no way can I consider the yet-to-be-revised parts as fiction. The working MS. has a structure I’m both making use of and treating as extended notes for massive change. It’s really just Part I of a novel that was never finished, so whatever Part II follows will be entirely new.

Future blog posts will look at the novel’s ongoing successes and failures, including any moment when I realize the project isn’t working and I abandon it. But I think it’s time to just push this thing out quickly and see what’s there. Caspra Coronae could simply be an experimental herald of some new writing I can’t imagine yet. I need to explore, and if the investigation seems unfocused or too revealing, so be it. There’s nothing to be gained from holding back.

I also see that this particular blog post may come off as psychically unorganized, but this is probably due to my not being sure where the fiction is leading.

It’s intriguing to be in this position. I’ve wondered: if I happened to be a bestselling author, would I be discouraged from trying an experiment like this?

A History in Brief of Not Letting Something Go

Old Writing. Is it okay to look at past writings which might be brought up to date as new novels? Is this the way my writing life has been destined to unfold, or is it a way of putting off new explorations? Can there be any explorations in the old stuff? Is looking at old writing similar to how therapy might explore childhood traumas? Backward-looking, but strengthening current foundations?

Caspra Coronae herself. She was a minor character in Notice and Dream Topology, but she had incredible force there as an addict who behaved nothing like one. I like the idea of calling the novel Caspra Coronae so much that I’m trying to think of a way to elevate that minor but fascinating character into something that will make the title work. It’ll be a challenge to figure out how to propel Caspra forward, but her new energies have already risen fast in the first three chapters.

The Evil Problem. The Nature of The Reunion. Notice and Dream Topology concepts never jelled because I never worked out what it all really meant. That may be fine for a puzzling Twilight Zone script, but in making this into a novel I need to be on top of what all that stuff means. Is it evil we’re talking about, or just fear? “The Reunion” is brainwashing, hallucinations, and incomprehensible horror, but whoever is marketing this evil knows how to repackage it in a welcoming way. But what’s its real nature? I don’t really know where to take that. If delusion and the madness of crowds is such a part of human nature, how can a novel plot fix that?

Uncertainty about Part II. Notice and Dream Topology’s mysteries would be intriguing to a reader, who’d naturally await resolution of them in Part II. But though I’ve sketched out eight vaporware chapters of a Part II, I have no more clue than the reader. Part II can’t be a struggle between good and evil that plays out like some video game, as I tried and failed to do in Linstar. We have to have a real reckoning with the fear. We need to keep walking through what the characters would really see, and feel, and do, in the terrible situation where Part II begins.

Literary, or The Final, Novel. In reviewing my published novels, I was struck by a more or less even split between literary and science fiction:

Even if many on the left column have absurdist aspects, that’s just background flavor; all those are literary works. While I don’t rule out more science fiction in the future, or would ban it from a new novel, I need something massive and grounded right now.

I might as well get the fear question out. Is there pressure to make this book any sort of final statement? Despite feeling ageless, I begin to see that not every project will get done. I don’t want to waste any time, or more importantly, any energy on fruitless detours, looking backward to old work, or what I call “quilting,” that is, the enjoyable craftwork of turning out one pleasant, not terribly important, novel after another.

I’ve refused to believe I have nothing left to say. I’ve tried to examine whether declaring that I still have much more writing ahead is mere bravado. But I really don’t feel I’m deceiving myself.

Successes So Far with Caspra Coronae

The ten interviews with the archetypes. The ten archetypes represent recurring character types found in most of my novels. Interviews with them spanning 120 pages were a major contribution and forced me to think of the novel as completely new, not just a revision of the old Notice and Dream Topology. They differ from the interviews I did with Jack Commer characters in that they use insider shorthand about my past writings, and the archetypes focus more on the nature of their personalities rather than the story, although some of them gave me great plot ideas. I may post some of the interviews on the blog anyway. Most of the archetypes become point-of-view narrators. As I started writing, I cut them from ten to eight, but the two cut ones keep clamoring for a say in the novel.

The ensemble nature of the plot. My hope is that each of the eight characters will have equal status and their own evolution in the spotlight. This may or may not prove to be at odds with elevating one of the archetypes, Caspra Coronae, as the title of the book. Does that mean the book has to be mostly about her? What will her function be? In any case Dave’s disastrous party winds up creating an accidental commune, a perfect testbed for ensemble characters.

Strong Part I structure. I can make use of the excellent energies of the original second draft, Notice and Dream Topology, even as I know the new characters will thoroughly transform it. This seems a good way to approach this novel: set up the new situations within the existing structure, even as the characters burn that structure for liftoff fuel. Then they help me launch an unimaginably new Part II into orbit.

Confidence in the fiction flow. You put so much effort into notes and plans, but then the flow of actually writing the fiction makes you realize how relatively unimportant those plans are. The first four chapters have treated the notes I’ve slaved over as almost inconsequential, and yet new energies are flowing which easily integrate these notes, or discard them, at the whim of the muse.

The Main Characters So Far

I’m still not entirely sure of my What If, the question that propels the novel, though of course that’s never stopped me before.

Maybe the What If is: “What if people wake up to the nature of their own evil, and their own participation in the madness of crowds?” But they won’t know how, I don’t know how, to vanquish that for all time, which is where I’ve thought the novel was supposed to end up. There is no clever sci-fi plot twist that will do that. The best the characters can do is offer a vision of an alternate future.

Another What If comes from interviewing the over-the-top Marina Nicker Nunn:

“In any case I’ve studied all the Marina archetypes from Naomi Kugel in Akard Draft One, through Moolka and Boots Emerson in The Soul Institute and Amy Nortel in Balloon Ship Armageddon, and believe me I’ve definitely got the energy for this part. So many forces within me. I can’t say I really control any of them, but they’re all here at my disposal somehow. In any case, Mr. Mike, I can’t tell you how happy I am to be here chatting with you about this wonderful, wonderful novel of yours! I’m definitely up for making it an outstanding success!”

So … what if all these forces start demanding expression, and resolution?