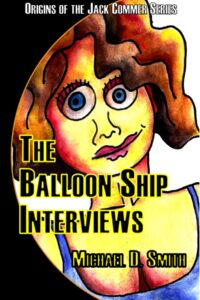 In developing Balloon Ship Armageddon, the seventh and final Jack Commer, Supreme Commander adventure, I interviewed twelve characters from the previous six books, wanting to know what motivations and energies they could bring to the project. Each character got a post on the blog over four weeks in 2018, by turns musing, arguing, and pleading with their creator for a chance to star in this last Jack Commer saga. All surprised me with their eloquence and their concerns, even those characters who were eventually cut from the book. Should I mention that I keep laughing out loud as I reread these interviews?

The Balloon Ship Interviews is a companion to The UR Jack Commer. Like that book, it’s not part of the Jack Commer science fiction series, but auxiliary background. Here’s what Sortmind Press has just come up with:

Smashwords eVersions. Normally $1.99, but coupon code SN78J makes it free in numerous eBook formats, including EPUB, MOBI for Kindle, and PDF.
Mass market paperback on lulu.com. This does have a price, but, just as with its companion piece The UR Jack Commer, it’s petite and gorgeous.

Looking at the interviews three years later, after completion of Book Seven, I’m struck by how well all twelve stayed in character. Though they all had major roles in the first draft of the novel, five were eventually reduced to minor functions. Waterfall Sequence, Ranna Kikken Commer, and Jackie Vespertine proved to be essentially side characters muddling the plot, so they disappeared except for mentions in the final MS. T’ohj’puv and Joe Commer wound up with merely supporting roles, but the remaining seven formed the core of the book.

Rick Ballard was initially slated to be written out after a ghastly death in chapter one, but his icky, testosterone-laced personality barged into the rest of the interviews and infiltrated the final novel as well. Jack’s son Jonathan James confronted his reputation for major, ego-tripping chaos creation and stepped up to a demanding role. Jack and his wife Amav underwent some necessary psychological discoveries about themselves and their marriage.

Amy Nortel found her promised niche as a truly over-the-top evil genius vixen. That’s her on the cover, Jack’s old high school English AP teacher, rejuvenated to twenty-five. She’s the actress who shows up for the audition determined to dominate the show, and she almost did.

That role fell to two characters: the brazen Laurie Lachrer 283 robot and the human she’s modeled on, genius physician/engineer Laurie Lachrer. Human Laurie, originally to have been fully replaced by her robot twin for this book, surprised me by fiercely protesting her exclusion and haranguing her way back for a major role. She and her robot argue about who’s the most qualified Laurie, and the quarrel continues into the novel. 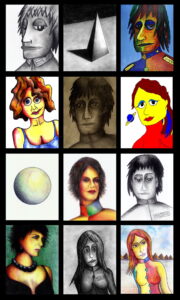 These are the original blog posts, identical to the book’s content:

I needed both The UR Jack Commer and the Balloon Ship Interviews to wind down from the major 2020 projects of re-editing the entire series and publishing Book Seven, Balloon Ship Armageddon, earlier this year. Yes, I may return to Jack someday, but for now, I’m done with him and there’s some new stuff to investigate. Which this blog will no doubt agonize over and celebrate.