When the solar system adopts the buggy SolGrid telepathic network as a defense against alien intrusion, Jack Commer’s impudent son Jonathan James instigates a rebellion against what he considers fascist brainwashing. His tiny army includes his lover Suzette, the wife of Jack’s Typhoon VI weapons officer; exobiologist Jackie Vespertine, emissary to aliens in the Iota Persei system; and the telepathic Beagle Trotter, bonded in an ancient Alpha Centaurian ritual to Jonathan James as warrior-brother. Jonathan James even convinces Patrick, the computer hacker who designed SolGrid, that his dysfunctional creation is wrecking Sol culture.

Sortmind Press has just republished The SolGrid Rebellion, Book Six of the Jack Commer, Supreme Commander series, with the cover featuring my drawing of one of the six rebels, Jackie Vespertine.

The SolGrid Rebellion was originally published in 2018 by Double Dragon Publishing. As with all the books in the series, I reedited the novel for clarity, but kept all plot and characters unchanged. As I mentioned in the previous post for Book Five, the original publisher had stated that as long as submissions met high standards, every new book in an author’s series would subsequently be published, so I was again determined that Book Six would be my highest-quality writing. 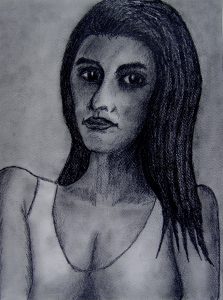 Over the past six months I’ve achieved a long-desired goal of republishing the first six Jack Commer novels through Sortmind Press. It’s hard to believe and I feel a little numb now, yet I’m also proud of finally closing out a megadose of editing, proofing, and publishing consciousness. I’ve learned much from this entire process and these six books are seeds I’ve planted for the future. They are stylistically much better than their original versions, books I’m proud of and which I can confidently market, as well as possibly later seek to sell to royalty publishers.

Consider the page totals for this series:

So I’ve just finished editing 1,806 pages of fiction since early July, and between October 16 and December 18 I published six books on Amazon and Smashwords.

The Worst Error I Found in The SolGrid Rebellion 2018 Publication

After much wincing, the only thing to do is laugh. From Jonathan James Commer interrogating Jackie Vespertine about the alien Ywritt race’s quantum computer capabilities:

Even though he leased a slew of quantum commuters from the Ywritt.

More Books in the Series? 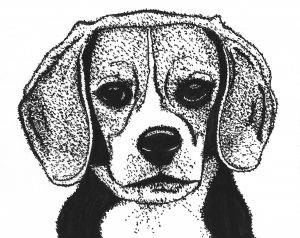 Would I have written more Jack Commer if Double Dragon Publishing hadn’t picked up The Martian Marauders in March 2011? It’s hard to say. I’d been thinking of the first three books as a trilogy for years, though I’d also been sending queries to publishers treating each book as a standalone novel, which any of them really could be.

But I’d already written Draft 1 of Book Four, Collapse and Delusion, by March 2011, and was committed to some sort of series, though I don’t recall having any plans at the time for anything beyond a fourth novel. But I do think having Double Dragon accept my series was an inducement to keep writing more. However, I wrote Book Seven, Balloon Ship Armageddon, at a time when I correctly suspected Double Dragon might fold. In contemplating something like a negotiating tactic for the book’s uncertain future, I wondered if offering it to Double Dragon as the final Jack Commer novel might somehow sneak it in just in time. Not a great creative state to be in, and the July news of the sale of Double Dragon and termination of my existing contracts came at just the right time for all seven books in the series.

I’m only now considering in what ways the first three novels form their own psychic expression distinct–possibly just to me–from the last three published books. Books One to Three, and Books Four to Six, do seem like two separate trilogy-like gestalts / themes / projects / life oceans. 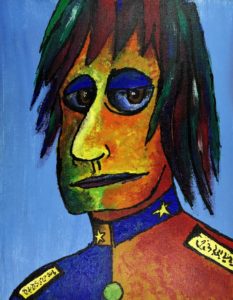 I created the first three, with some of their plot ideas extending back to the eighth grade, in the mood of feeling beneath publishers, in thrall to systems beyond my control, and with no real hope of publication. The third novel, originally titled Nonprofit Ladies, even veered into a somewhat cynical and snarky tone. That book has since been thoroughly rebooted, and in fact the retitled Nonprofit Chronowar now strikes me as being one of the most ambitious projects I’ve ever undertaken.

But the first draft of Book Four, Collapse and Delusion, was composed in a new mood. By that time I’d gotten an indie publisher’s request to see the full manuscript of the second book, Jack Commer, Supreme Commander, and I’d self-published my novella The First Twenty Steps through Barnes and Noble. I’d also just started blog.sortmind.com and was happily exploring a new direction in seeking publication via eBooks. Writing energies were opening up, and I finished Collapse and Delusion in 2012, knowing that Double Dragon would take it. There was also something newly grown-up about Book Four, and it led to further confident exploration in the next novels.

Editing the first three books was a major accomplishment, not only for correcting a number of errors and dealing with stylistic issues, but for encapsulating a past era of writing in contrast to the new era of the last three–the last four, actually, counting Book Seven, Balloon Ship Armageddon, which I’m looking forward to finishing and publishing early next year.

Series Conceptual Issues, and the Main One in The SolGrid Rebellion

As happened with some of the other novels, working on all six at once sometimes prompted me to examine conceptual issues and provide further explanation. In 2018’s The SolGrid Rebellion, Jack’s wife Amav recalls an experimental dip into the telepathic SolGrid the previous December as if it had been her first such experience. But I’d forgotten that in the previous book, The Wounded Frontier, she’d been fully immersed in a much worse Grid a few months before that. So it was good to revise as follows:

“Oh, of course!” Amav shuddered. Like Jack and Joe, she’d dipped into SolGrid just once in December and had been appalled by a couple seconds of contact with everything. She’d also seen in those few seconds how many USSF secrets she happened to know were leaking out. Some of the security cleanup after SolGrid came online was for concepts pulled out of her own mind.

Of course, try as she might to forget, December wasn’t the first time Amav had known Grid consciousness. She could barely force herself to recall last July, and her insolent son’s demented attempt to restore the Alpha Centaurian Grid and name himself Emperor. But for half an hour Amav had known the full ancient Centaurian horror of it. She’d tried to tell herself and everyone else, including Jack, that she didn’t remember much, or that she’d succumbed against her will, but that was pure self-delusion, for she recalled every humiliating detail. Deep down she’d chosen to follow her own son’s command to seduce her old friend Phil Sperry, just so JJC and his cohort Clopt could record some idiotic human sexual code for their nasty software. She’d spent months trying to convince herself that she’d simply been temporarily brainwashed, but for half an hour last July she’d readily ridden her uncontrollable lust for poor Phil, oblivious to Jack who’d been so seriously injured that he might have died right next to his frenzied nude wife straddling Phil, begging him to bang her brains out. Yeah, it hadn’t gone anywhere near intercourse, but so what? The shame of it was more than enough.

So in December she’d dared herself to sample SolGrid to prove she could handle it, that July had just been an aberration impossible to repeat. And in a way the experience had been beneficial, because it was obvious that this SolGrid software was different. There was no sense of brainwashing; you always knew you could come out. But it was hard to admit that the flavor of being inside SolGrid was the same as last July, with the identical temptation of possibly deciding after all to refuse to leave such paradise.

What really scared her was that the Technique, as it was called, for entering SolGrid seemed at first as complicated as learning a new programming language. But after the first rough steps of alien logic, the SolGrid software proceeded to teach you how to memorize the rest of the Technique. The entire process took three seconds. And once you had the Technique, you never forgot it. Millions of Sol citizens now used SolGrid daily, but where were their minds after three and a half months of use? How could anyone, especially a genius like Patrick James, contend that SolGrid offered an enlightened new way of sharing intimacy with billions of people? That it would make the present SolNet digital network look like Neanderthal cave drawings?

Jack had told her that although he remembered the Technique himself, he wasn’t sure he could call it up so quickly, in contrast to Amav who was worried about just how fast she could. When Jack said he wanted to start meditating, she was afraid it might inadvertently lead him into the Technique. But he’d assured her that, as far as his limited experiments showed, meditation and SolGrid were mutually exclusive mental states.

Amav thought she should take up meditation herself, if only to ward off the irrational fear that she might slip into the Technique in a moment of anger or stress.