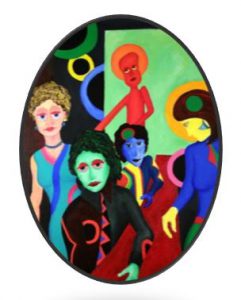 The idea for CommWealth came from the first part of these notes from a dream (“Their Satanic Majesties Computer Software Guide”), although successive revisions changed much of the plot. The second part, “The Tremendous Romance,” wasn’t used in the novel. The third part, “The Library Fantasy,” also wasn’t used, but has a similar tone to that of the novel’s ending.

Design Considerations for New Writing. A Sort of Plot.

“Economics As if People Mattered”

Character: Allan. An actor. Also supercilious asshole. Masks true identity. But he is aware of this problem–also doesn’t know how to get to the truth. His compulsive sexual fantasies destroy his sex life with his girlfriend, Ann. His whole life revolves around his fantasies. But he is such a good actor that he manages to pull off an acceptable front to the world. His penalty: that he doesn’t even know himself. His fantasies and sexual acts grow more and more absurd.

As story opens, Allan is walking, sees a Porsche or whatever, and asks the owner for the car.  Owner must relinquish it. In the next pages we see, casually treated, as astonishing variety of “free transactions” like this. Everything is free in this society. You just ask for it. There is a 30-day waiting period before one “possessor” can ask for that same item back from the new possessor of it. There is subtle retaliation–for instance, the Porsche owner, while not allowed to act angry about giving up the car, does go ahead and ask for Allan’s coat and tie. Allan recognizes the maneuver–he always manages to make his askers “pay” somehow himself. The other technique is to hide as much of what you’ve got as possible. But these people are constantly castigated as “hoarders” and surprise inspections of homes, and publications of people’s inventories, are common. Often you are called up at night and asked for several of your items over the phone, with instructions on where to leave them for pickup.

Allan has adapted to this society well.

At home (he got a new suit and tie, but only for reasons of personal vanity), Allan stays up to 2:00 AM writing. He knows it is poor. Mostly he is writing out sexual fantasies involving Lisa, a woman he once had an affair with. Meanwhile Ann sleeps in the next room, vaguely aware of Allan’s distance.

Allan writes various poems and “confessions,” in an attempt to express all his pain, or get one line of real truth out. But he always misses. He’s never correct. He buries the poems in coffee cans out in the back yard. There are fifty or sixty cans buried out there. One reason is his paranoia–no one, least of all Ann, must ever know. Secondly, even writing is not considered personal property. Folders of poetry, or novels, are registered on one’s “inventory” and can be requested by others.  Allan has never yet lost any of his poetry. (He just started writing last year, “under the pressure of it all,” and plans to write a play “someday,” that “will finally express everything.”)

He buries the can in the morning, after Ann has gone to work as an insurance accountant. He then moodily walks to The Cup of Fog.

The Cup of Fog is a coffee and tea house run by a married couple, Jill and Steve. Another character there is a friend of Allan’s, a former doper, now a soccer player and bicycle racer, named Richard. Richard is totally into being fit and healthy now. Yet there is a subtle need for friendship going on between him and Allan. Allan thinks of Jill and Steve as “mystically stable,” and longs for that sort of relationship–even though he recognizes that he probably wouldn’t want to remain in a monogamous relationship. He changes too much. Allan is vaguely aware that both Jill and Steve “tolerate him” only, that they consider him too neurotic (although he is a great actor, they know). Yet Richard, considered everyone’s friend, links them all.

Allan spends all morning drinking coffee and engaging in various discussions with Richard, Jill and Steve. Allan doesn’t work, not needing to because of the “free” law. (Most people do choose to work, however–a brief age of total freeloading was followed by almost zero production, and gradually people realized they needed to work, both for their own sanity and to keep some semblance of a society going). Richard doesn’t work, either, but spends the entire day training. His “work” is with the city’s professional soccer team, anyway. Allan tries to argue that his “work” is the theater, but he knows himself he doesn’t spend enough time really developing himself. Again, he feels he is cheating.

Around eleven AM Lisa comes in to buy a cup of tea and leave. She is pleasant to Allan, but the old strain is there. She leaves. Allan suddenly has a plan. If everything is free, then why not Lisa? He spends the rest of the afternoon nervously plotting his plan. He knows she always shows up as a certain bar on Friday evenings after work, sees a bunch of her friends there, etc. In fact, it was even mentioned during the Cup of Fog conversation, and Allan took it as some significant hint.

At five, he goes to the bar and finds her. She is nervous. He then blurts out that he wants her, and then states that she must comply, for everything is free. She refuses. He asks for all her clothes, right then and there. She still refuses. “Shall I call a cop?” Allan says. Conversation gets quite absurd. “The law hasn’t ruled on whether people own their own bodies,” Lisa maintains. Allan says that the law states that everything is free, everything must be forked over. Lisa pulls the “price” maneuver and asks Allan for his house. “Fine, but you must give yourself to me.”

They go to the house and resume their old affair. But Lisa is angry anyway. She reveals that she’s been trying to start a new relationship–with Richard. Allan is shocked, and terribly hurt and jealous. And then he realizes that Lisa owns his house, that he and Ann must move out and ask for a new one. Yet the coffee cans are buried on the property. Lisa says (not knowing this) that she’ll dig up the entire back yard for a garden and also a swimming pool next week–long before the 30-day limit expires and Allan could reclaim his house.

Allan realizes that he doesn’t even want Lisa to know of his fantasies. In desperation he tries to ask for rights to material buried in the back yard. Sensing victory, Lisa denies this. Allan throws himself on her mercy and reveals the contents of the cans. Lisa says she will dig them up this very night and publish all of them.

Allan finds himself “asked” to work in Australia and reluctantly, after consulting an attorney, leaves for Australia. More than property is indeed involved in “everything being free.” Evidently an old résumé was found kicking around inside a computer, and whatever company wanted him could have him.

Journey to “island” at south of Australia. Of course, Allan had visited Australia once as an exchange student and knew the place–perhaps that was one reason he was chosen. When he gets to the quaint seaport town, he is totally surprised–it has twenty or thirty students, or faculty, from that Sydney university here, all working out their interesting careers. He only knew them tangentially but is overjoyed to see them.  These people all decided to work in this same “dying” town and revitalize it as an experiment–but found themselves changed by it, and decided to live and work here for real. A whole string of interesting, colorful characters. Allan finds he had been chosen to work in the town’s detective agency, working with two aboriginals and one white man. One aboriginal is Holly, the brains of the outfit, although the black man is supposed to be in charge. The white guy is fairly crazy, but a good detective. Allan gets to know everyone in the town, including the doctor (formerly university professor) and all his patients.

Allan narrowly avoids being knifed by a street punk and then watches this punk kill someone (or something). His inaction contributed. The detective team sets out to find this guy. Allan begins to see that he is much like the man they are seeking–he feels he doesn’t belong in the team anymore. A lot of remorse. After a long chase, all three others are killed by this man. Allan must pursue.

Richard receives the numb Allan back and tries to soothe him. An all-night exercise session, “better than those all night drug sessions we used to do.” Lisa told him what happened and Richard, after much reflection, decided to forgive and forget. But Allan is numb and feels destroyed, feeling that he has steadily ruined himself since he was 20. All this through Richard. Yet Allan’s inner state brought out through much conversation. Wandering through the old University grounds–a vast, somewhat scary park. Dawn, and buried dream of Brown-Jones conclusion of mythic day at Rice–Brown-Jones like a spaceship on the pad at dawn.  Something intelligent is happening here. Allan feels spaced out, totally confused. Richard guides him inside to the gray “church.” The “easy mix” of religions and sexuality in “this society.” The woman who dances in her leotard in the aisle. Astonished, Allan notices that it is Jill–expressing herself. His whole picture of her, of her and Steve, of the Cup of Fog, and lastly, of his own potential, abruptly shifts.

“My God, I could never come right out and do that,” Allan says in awe. “I just couldn’t afford to.”

“Sure, you can afford to,” Richard says. “We all have that within us.”

“Yes, it is difficult. But once you make up your mind to pay the price, it becomes easier and easier. See how easily Jill pays the price of her freedom.”